>So, I’m in Chicago for 36 hours, mostly to interview the great Nnedi Okorafor, and I’ve finally reached that point where there’s no time for exploring. 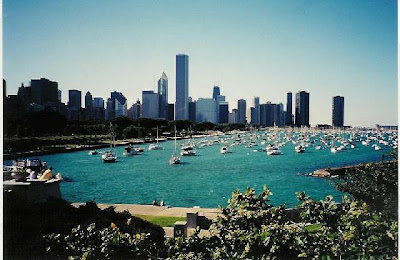 Chicago Skyline by J. Stephen Conn. Used under a Creative Commons license.
Nnedi and I met at Yassa, a great Senegalese restaurant on the South Side of Chicago, and the sum total of my Chicago tourism has been the journey out there from O’Hare Airport.
To be fair, it was a pretty epic journey, involving 2 trains and a bus which wound through a rather desolate low-rise stretch of boarded-up and barred shopfronts. On the bus, a Vietnam veteran began to lecture a group of teenagers who were skinning up right under the driver’s nose.
‘I’m glad to see your education ain’t going to waste,’ he growled sarcastically. But the boys were smooth talkers and somehow the vet’s stern monologue on the importance of getting an education was turned around until he was admitting that he didn’t mind the occasional toke, and it all ended in hugs and handshakes.
When I stepped off the bus and through the door of Yassa, the world seemed to come alive. The restaurant is bright, welcoming and decorated with displays of African goods, from sculpture to musical instruments and even perfumes!
The television was tuned to Africa 24, and despite my best attempts to dredge up my schoolboy French, I’m afraid their political pundit’s commentary escaped me.
Between the sorrel drink and maffe (a kind of lamb stew), I was totally sold on Yassa’s menu. Nnedi’s grilled tilapia looked great too, although I figured it’s bad manners to take food from the plate of the person you’re interviewing!
I hadn’t realised that African restaurants also serve as general stores for African clothes, music and African DVD’s, so I was pleased to pick up a Nollywood movie about a crime-fighting female journalist – although they didn’t have Nnedi’s recommendation, Warrior’s Heart.
Despite all this adventure, I’m going to be told off by my friends when I return to New York.
‘You didn’t do the architectural boat tour?’
‘You didn’t go to Hot Doug’s?’
‘You didn’t go to Do the Moon Hop at Late Bar?’
(My friends all have very different ideas of what constitutes a good time).
But there’s work to be done, so I’m sitting in the Holiday Inn Express, with a terrible coffee and a lot of writing to be done before they kick me out at midday. I’ve finally become that kind of jet-setter.
It’s probably good that I haven’t activated my Twitter account – I might mutate into one of those terrible corporate travellers who spends all their times tweeting complaints about the Chicago transit system or the quality of hotel breakfasts.
Much better to celebrate yesterday’s fine meal with one of the greatest living writers, and crack on with the day job.
If I’m lucky, there’s time for a pilgrimmage to the Threadless store. As New York continues to mutate me into a hipster, I feel the need to buy this shirt. Don’t you?
*
Next time on Books and Adventures: more news from New Zealand Book Month, reports from a Q&A with charter school pioneer Geoffrey Canada, and, of course…Nnedi Okorafor.