So you’ll have seen the announcement that Marvel is finally going to give us a female-led superhero film in Captain Marvel, due July 2018. I’m pleased, of course, that they’re making space for a badass, awesome woman to be the lead in a Hollywood superhero franchise, especially one tied to the current Marvel money train. But also because Captain Marvel – then Ms. Marvel – is one of the first superhero comics I read.

Back in the mid-eighties, the department store chain British Home Stores put out a hardback annual called The Superheroes Special Edition, filled with old Marvel reprints. My mum bought me a copy as a present; I read it over and over, put a glittery name label on the inside cover, and took it into school. I remember the X-Men facing off against Sentinels, the Fantastic Four pitted against alien dopplegangers, and the Silver Surver fighting the Abomination – all supremely awesome to the five-year-old mind.

But my very favourite story came from Ms. Marvel #5. In it, New York magazine editor Carol Danvers has a premonition that a “Super-Truck” of radioactive cargo is going to be attacked. Carol has to transform into Ms. Marvel, an alien alter ego with a separate personality from Carol’s. Not only is she at war within, but when she goes to protect the truck, Ms. Marvel is mistaken for a villain and attacked by another superhero, the Vision. 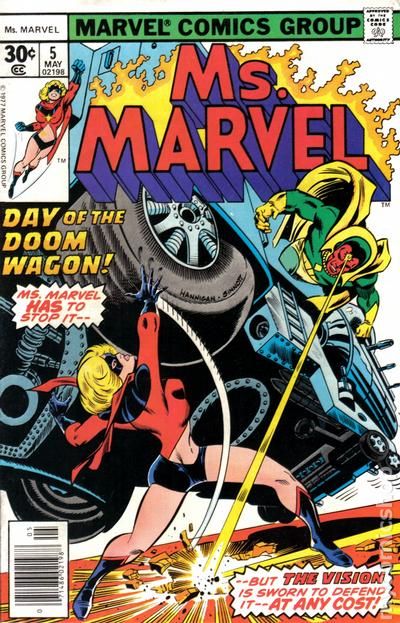 I remember being captivated by this story. A superhero who was at war with her secret identity; a superhero who had to fight “proper” heroes who didn’t trust her; a superhero who uses trickery to triumph – as in the page at the top of this post, in which Ms. Marvel sets a trap for the Vision. With stories like this, I took it for granted that of course girls could be superheroes too – not just token characters, but strong protagonists facing complex challenges. Ms. Marvel was unquestionably cool in the same way that Mildred Hubble from The Worst Witch and Dinah from the Demon Headmaster books were. I have to thank my mum for buying me all of these books and introducing me to all of these awesome characters. Thanks Mum!

I’m really pleased that kids who grow up with the next generation of Marvel movies, boys and girls alike, will also see Carol Danvers battling baddies and saving the world.

Aussie high school librarian Tracy Dawson discusses feminism and media literacy with a team from Auckland Libraries and Auckland University of Technology in this blog post, XXUnmasked.  You can read a group discussion about comics for girls at Comics in the Classroom: Supporting Female Students, part one and part two. And I wrote a bit on the limits of grim male superhero characters at Here Comes Your Man: Time For Some Smiling Superheroes?