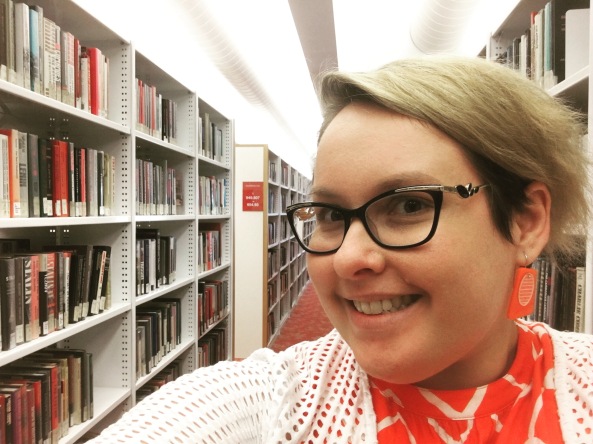 Amy was my partner in crime on various initiatives at the State Library of Queensland, including baking cakes for occupational therapists at Griffith University. She’s a natural networker, enthusiastic, innovative, and determined: great qualities in an ever-changing sector like Libraryland.

Pinned to the top of Amy’s Twitter timeline for most of 2017 has been this statement:

I started our chat by asking Amy: Why did you make this your 2017 life goal?

In the last half of 2016, as my profile starting rising in Libraryland, a lot of people were asking me what my career goals were and I had no idea and no answer. I felt like I should, or I was supposed to, have an answer and a plan but alas, nope.

When Sally Turbitt sent me an article on ‘The Good Life’ and embracing mess I immediately identified with it and felt so relieved! I didn’t have to have a plan! Woohoo!

Why did you share this resolution publicly? How have people responded to it?

I am surprised by the number of people who really struggle with the concept of not making career plans! Even though I am sure many of them have none of their own, they still feel like they should and it is the right thing to do.

Many of our library leaders, including the Director-General of the National Library of Australia Dr Marie-Louise Ayres, have spoken about having no plans for their own careers and look what they have achieved!

I shared this publicly because I finally felt like I had an answer to the question that was bugging me and I was relieved! If I was relieved, I hoped some others would be too. And maybe something cool would come from it!

Strict plans assume everything around you will go as expected, even the things that are out of your control. You cannot predict the future. Priorities change for yourself as well as the people and organisations you work with and who is to say the original plan is the best option? Staying flexible and agile allows us to act on opportunities that present themselves and release us from the constraint of things that aren’t working. Sometimes the unpredictable is the most rewarding (and the most fun).

You were one of the co-convenors of the NLS8 library conference this year, and you also play a role in the running of the State Library of Queensland’s Business Studio. How does this opportunistic approach apply to organising stuff beyond your personal career path?

Any project, especially mid to long term projects, need flexibility and agility to take advantage of opportunities that present themselves. The world moves fast these days and you cannot predict future trends (Pokemon Go), technology or people/organisations/businesses who will emerge as experts and leaders.

The SLQ Business Studio was created in the startup tradition of an MVP or minimum viable product. Just enough resources and features to open the doors and attract early members but designed to evolve based on member feedback and requirements. For example, we assumed that members would want a bustling, noisy workspace but actually, they wanted a quiet workspace where they can get shit done. If we had stuck with our original ideas or followed examples of other coworking spaces, we would have alienated our members.

NLS8 was a two year project and this is how we started.

Our aim was to create an NLS8 that was exciting, innovative and challenging. We hoped to inspire and guide new LIS professionals, with as many opportunities as we could possibly offer to get hands on with emerging technologies, to create connections with other professionals, and to shape our own careers, plus the future of libraries in Australia and beyond.

How could we have created this without remaining flexible and agile and embracing opportunities right up until the event? I pushed for Drag Queen Storytime which was a late addition to the program based on international library trends.

Basically, many things changed over the two years – some of them within our control and some of them out of our control – but the aim was to produce the best outcome at the end of the project.

Can you give us some specific examples of cultivating opportunities for NLS8?

Our International Librarians Network keynote started as just Clare McKenzie who was the only member based in Australia. Then Kate Byrne coordinated her travel plans to be in Australia and we decided to Skype Alyson Dalby from Denmark. Our opening keynote kept evolving and we just kept saying yes and finding a way to make it work! Would it have been easier to say no and just stick with one presenter in person – yes. But would it have been as awesome – hell no!

Saying yes to being on the committee for NLS8 almost immediately starting giving me new career opportunities. The biggest opportunity was when I was offered the role of Queensland State Manager for ALIA in early 2016. Sue McKerracher and Angela Vilkins decided I would be the right person for the role, I agreed and I said yes! This was the best career decision I have made so far but I want to make it clear that my success has been because I have embraced (and created) opportunities along the way. Just being in a job doesn’t make you a success – you have to work bloody hard!

Looking back, what has happened as a result of setting this goal for 2017?

I gave myself permission to act on opportunities, create opportunities and choose the fun. I say choose the fun because that’s what I want in my career and my life. I want a job that is fun, where I work with awesome people and do cool stuff. I will not settle for safe, secure and boring.

And what are you contemplating for 2018?

I have just launched Pineapple GLAM which is my new platform for embracing opportunities. If you want to see what I am up to or get in contact with me to work on the next big opportunity then visit me here. Stay tuned – there will be more of Pineapple GLAM coming soon!

You will definitely see more of Sally Turbitt and I popping up in Libraryland too. Can’t reveal too much now, and who knows what opportunities will emerge, but keep your ears open and your eyes peeled!

Find out more about Amy and her work at her website, Pineapple GLAM.

For more on the benefits of being flexible, opportunistic, and responsive to messy circumstances, see Library Island: The Professional Benefit of Play, and New Zealand’s Jerome Rivera talking with me about #CodeBrown.