Today on Books and Adventures we’re joined by Roland Pietsch, a historian whose chequered past includes running a music venue, and work on TV’s Who Do You Think You Are?, alongside university and outreach work in East London.

Roland’s book The Real Jim Hawkins, released this month, looks at the real-life counterparts of the hero of Treasure Island – boys as young as thirteen who enlisted in the Navy when Britannia ruled the waves. For fans of Robert Louis Stevenson’s great adventure story, it’s an opportunity to see the truth beyond the swashbuckling adventure.

‘Of course I was a Treasure Island fan as a kid, even though I grew up in the very non-maritime city of West Berlin,’ Roland told me.
﻿﻿

﻿﻿﻿‘Treasure Island had been adapted as a West German television series. Then my auntie from the other side of the Wall gave me the actual book, and an East German record, as Christmas presents. Jim Hawkins’ treasure hunt not only easily crossed national borders, but even the hardened ideological borders in my childhood.’

As an adult researching his PhD, Roland discovered the truth behind Stevenson’s novel in the archives of the London Marine Society, an eighteenth-century charity that recruited thousands of impoverished boys for service at sea.

Roland found that the real-life boy sailors had a surprising amount in common with Stevenson’s Jim Hawkins: ‘Both were placed in such dangerous and adventurous situations, that they had to stop being boys and prove themselves in the adult world.’

One of the reasons for recruiting sailors so young was to make them immune to the horrors of war. The Navy fostered a culture of fearlessness and nonchalance in the face of danger. It was also necessary to impose discipline on unruly boys brought on board.

Roland compares this to ‘an eighteenth-century ASBO’, but then points out that Stevenson’s Jim Hawkins is no clean-cut hero himself: he takes the stolen treasure at the end of the novel, without considering that his mates have no more right to it than Long John Silver and company: ‘Doesn’t this hint that even the fictional Jim Hawkins was a bit of a cheeky character?’ 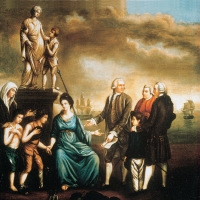 Sadly the fictional Jim’s prospects were far happier than those of real 18th-century boy sailors.

In such dangerous roles as ‘powder monkey’, boys were expected to fetch gun powder from below decks to charge the ship’s guns, dodging shot and wooden splinters in the heat of battle.

‘Many lost their lives at sea,’ says Roland, ‘or struggled to come to terms with witnessing so much bloodshed at such a young age. Some battle scars went deeper than a wooden leg.’ Alcoholism and internment in the infamous madhouse at Bedlam were often the consequence of a seafaring youth.

One of the more incredible real-life stories discussed in Roland’s book is that of Mary Lacy. Disguised as a boy, this teenaged girl managed to serve on board a cramped Navy vessel. Ships of the time like HMS Victory comprised 850 men in a small wooden world, 50 metres long, 15 metres wide and 6 metres deep, a challenging place in which to conceal one’s true gender.

‘Then again,’ Roland points out, ‘washing opportunities were limited, so nobody ever detected Mary. The closest they came was when she challenged one of the other ship’s boys, who was a bit of a bully-boy, to a fight – she was expected to take her shirt off for the boxing match!’ 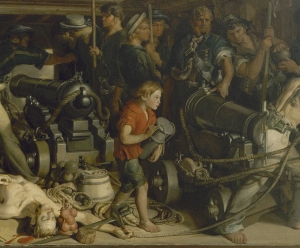 Roland’s book offers a fascinating and often surprising glimpse of the truth behind the vision of seafaring life found in novels and movies. It’s available here, and you can find Roland’s article on The Real Jim Hawkins for Sabotage Times here. For more information, visit Roland’s website, http://www.rolandpietsch.com/

Next time on Books and Adventures – pausing only to catch breath after the Birmingham Half Marathon – we’ll be beginning our in-depth look at the writing, and legacy, of Australia’s Patricia Wrightson.