This week, our Books and Adventures interview is with Alex Simmons, who has written for the stage, screen and radio alongside work as an educator, performer and comics creator.

Over the course of a 20-year career, Alex has founded the Kids Comic Con and taken it around the world from Buffalo, NY to Senegal, created the African-American comic-book adventurer Blackjack, and even brought Barack Obama and Sarah Palin to Riverdale in a special two-part story in Archie Comics.

In a conversation that covered everything from 30s movie serials to the outreach work of Bronx Community College, Alex demonstrated that Books and Adventures are his business.

Appropriately for Black History Month, we began by talking about his character Arron Day, a globe-trotting soldier of fortune known to the world as…Blackjack.

‘In the 1930s, we were prepared to go out and explore. To inspire kids to be good adults.’

In his teens, Alex Simmons attended a film club on New York’s West 40th Street, showing old movie serials such as Captain Marvel, King of the Rocket Men and The Phantom. One particular show stayed with him.

‘Daredevils of the Red Circle stood out,’ Alex explains. The 1939 serial followed a trio of acrobats turned private investigators, who seek revenge for the death of a family member. ‘Daredevils had a black character: he was the butler to one of the main characters…and his name was “Snowflake”!

‘He was an awful stereotype, rolling his eyes, with this high-pitched voice, but I remember one episode where the heroes were trapped in a garage filling with fumes…The stereotype suddenly falls away, Snowflake helps break into the garage and rescue the others. It’s his one moment of competence. Of course, nobody even acknowledges this, and within a minute he’s straight back to the old characterization.

‘Watching that serial made me think – this was the 1930s. There was a black presence. We were there. And not just rolling our eyes and waving our hands in the air! I wanted to tell stories about the African American presence in this time, when parts of the world were still full of mystery and wonder, when we were willing to go out and explore! Unlike now when we’re so jaded by technology and shaped by the media that the devout can go to confession through an iPhone app.’

Alex came up with Blackjack in 1988 as a conduit for telling stories about the 1930s and writing an African-American presence back in to our vision of those times. Arron Day, adventurer for hire, grew up travelling the world with his soldier-of-fortune father. As he takes on enemies both foreign and domestic, he explores his father’s legacy and rights the wrongs of a blood-soaked past.

Arron is a two-fisted protagonist in the style of Indiana Jones, but also a thinking man’s action hero, perceptive and astute. In the Blackjack stories, Arron’s ability to pick out a face in the crowd or spot a secret glance between two conspirators is often the key to his survival and ultimate success in saving the day. Alex, who wrote the stage play Sherlock Holmes and the Hands of Othello, acknowledges a certain debt to the man from 221b Baker Street:

‘I’m a big fan of Conan Doyle’s writing and I wanted Arron to be an intelligent hero, without being a carbon-copy Sherlock. He doesn’t pull together evidence to make elaborate deductions, like Holmes – but Arron is supremely observant.’

Arron is accompanied in his adventures by Tim Cheng, a dignified Asian servant who Alex wrote as an intelligent and independent figure – ‘my apology for Charlie Chan.’

Tim falls into Arron’s service after Arron wins a New York brownstone ‘and everything in it’ during an unseen adventure prior to the first Blackjack story.

The Blackjack comic toys with the old Green Hornet/Kato dynamic by having Arron suspect that Tim resents being ‘owned’ by another man. In the storyline Blood and Honor, Arron and Tim are called on a mission to China, during which Tim’s trustworthiness is put in doubt – but Tim’s secret loyalty proves to be to his family, rather than Blackjack’s enemies. By choosing to live in New York with his bride, alongside Arron as a friend and partner, Tim ultimately redeems the loner hero whom he serves.

Alex’s commitment to redressing past prejudice extends to the villains Arron confronts on his travels. The first Blackjack comic sends our hero to the Middle East, a location suggested to Alex by his mentor, the celebrated editor-illustrator Dick Giordano.

‘We wanted to open the Blackjack series with a story that showed Arron to be a globetrotting hero. This got me thinking of those prejudiced old Thirties movies again. I couldn’t have all the Middle Easterners be dumb bad guys who go ‘Aieeeee!’ when they die. So I focussed on the Touareg people, nomads who had fought against the colonial powers.

‘In Second Bite of the Cobra, Arron faces a principled, intelligent villain – a Touareg rebel gone sour, robbing from his own people. So the final showdown between hero and villain is also a crisis of conscience, with the Touareg leader forced to recognise that he’s betrayed his own beliefs.’

Alex always envisaged Blackjack as a legacy character whose heroic mantle is passed down through the generations. Arron’s father Matthew appears in the series seen through the prism of his son’s memory, and Alex even played Matthew, alongside his own son as the young Arron, in the flashback scenes of a 2001 radio play. Alex also laid plans for a sequel series running in the present, where Arron’s estranged grandson finds himself drawn back into the family business.

With comic books and even a radio show to his name, Blackjack remains a compelling character and a great contribution to the roster of African-American heroes. But his greatest adventures are surely yet to come…

Next time we move from Alex Simmons’ original creations to a famous American comic-book brand, which Alex took into the 21st century by bringing Barack Obama and Sarah Palin face to face with none other than…Archie! 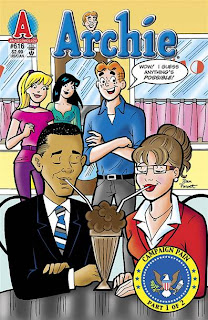