Click for the first part of this interview with Alex Simmons.

‘When your children are growing up, you suddenly realise – I’m not Batman, I’m Batman’s Dad!’ 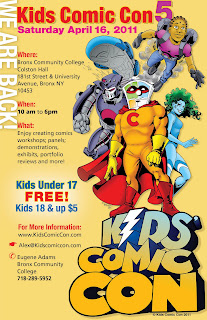 Comic creator, writer and educator Alex Simmons’ main community endeavour these days is the international Kids Comic Con, which gives children their own comic book event at a time when so much of the industry seems focussed on marketing to geeky adult males.

The Comic Con originated when Alex provided a children’s activity area at Wizard World’s Chicago Con around 1998. Many visitors used the area as a babysitting service while they toured the convention, but that small side event was enough to provoke Alex’s creative streak.

‘That experience validated what I already suspected – that we needed events specifically for kids. Overall, the comic book industry is geared towards selling to guys in their thirties – and in economically depressed times, they’ll continue to follow the money.

‘It’s another symptom of the way we are short-changing our children in society at large. We keep giving them failure, anger and frustration. They are the future – and that doesn’t just mean training up a new generation to look after us in our old age – it means giving them their own lives, their own opportunities and choices.’

Alex’s yearly Comic Con brings together artists and publishers, librarians and educators, to give children and their caregivers just such opportunities to explore the world of comics. Attendees participate in workshops and meet with the men and women behind the adventures of their favourite characters. In 2010, the Convention went to Senegal to bring their brand of fun along with an art exhibit called, ‘The Color of Comics‘ to an African audience of children, fans, educators and – hopefully – future comics creators!

Alex couches his sense of mission and personal responsibility in terms of comic books. ‘I love sidekicks like Robin from Batman or Short Round from Indiana Jones – as a kid, I was inspired by junior heroes who were an integral part of helping the hero win. Later I went through the stage of life where you identify with Batman. And then your children are growing up and you suddenly realise – I’m the parent that gets killed now! I’m not Batman, I’m Batman’s Dad!’

Alex’s acceptance of his role as a parental figure and mentor is part of his unique success as the mastermind of Kids Comic Con – ‘How come it was me of all people who set this up? It wasn’t that i was the only one on the planet who could do it… But i was the one committed to making it happen. Obsessed, even. I had the contacts in the comic book industry and the connections with educators too.’

Alex didn’t do this alone, though. ‘Much of what we’ve achieved would never have happened without Eugene Adams, Director of Collaborative Education at Bronx Community College. Working with him is endlessly remarkable, endlessly rewarding. He’s been a kindred spirit who gave the Comic-Con a plan, a venue, and a staff of volunteers. If we hadn’t made it happen with all that support, then we’d have been asleep at the wheel.’

A large part of the work of Kids Comic Con involves empowering young creators with the latest technology, using free workshops and outreach sessions to give a taste of the software used in modern comics production. My recent interview with Cody Pickrodt showed how hard it can be for young creators with no computer skills to work in this medium.

Kids Comic Con offers a wide range of opportunities for young people to develop such technical skills. Even the convention website was originally designed by students at Borough of Manhattan Community College.

Alex says, ‘The future is in danger of separating us into technological haves and have-nots. People need access to the means by which they can make a living, and more and more that means technology. Not every child we work with may grow up to be a graphic designer, but they’ll surely need more from a computer than just Facebook.’

Kids Comic Con brings together many strands of Alex Simmons’ work over the past 20 years: a sense of social and historical consciousness, seen in his 1930s adventure stories; a duty to empower young readers and writers with critical thinking, as found in his Archie-meets-Obama story; and above all, a sense of wonder and desire to explore and engage with the world around us.

‘No child is born with a desire to fail. It’s our mission to fire their sense of wonder and of possibility. To empower them to believe in the thoughts which occur to them, and give themselves time to consider the value of their own ideas.’

Check out the Kids’ Comic Con website for more information.