Find the first part of this interview here.

During our interview in Chicago, Nnedi showed off one of her prized possessions, an object which stands as a manifestation of her fantasy world in ours: a Kindle which has been decorated to resemble a giant folded leaf.

Reminiscent of the ‘Sandpiper’ laptops built from natural materials in William Gibson’s Idoru, Nnedi’s Kindle is a real-life emblem of the kind of distinctive technology which exists in her fantasy world, Ginen – a realm which blends plants and hardware, where the term ‘techno-organic’ has more to do with sustainability than the Borg or H.R. Giger’s Alien. 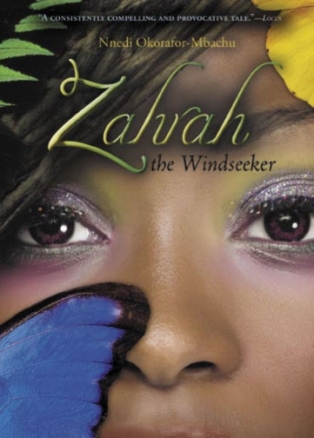 The defining technology of Nnedi’s stories, however, is one that’s already centuries old – the book. Time and again books play a key part in her novels, whether it’s Akata Witch’s Fast Facts for Free Agents – an unreliable, conservative set of rules for young wizards – or the Forbidden Greeny Jungle Guide of Zahrah The Windseeker, which is virtually a character in its own right.

Uncooperative and all too fallible, the Guide is Zahrah’s only source of information on the mysterious jungle into which she must venture. The device is reminiscent of science fiction’s first and greatest guidebook, The Hitch-hiker’s Guide to the Galaxy – and that’s not by chance.

‘Hitch-hiker’s was my first sci-fi experience, and the first book that ever made me laugh out loud,’ admits Nnedi. ‘The physics, the jokes, the way Douglas Adams writes. It was inspiring.

‘I added some extra features to the e-book of Zahrah to give it that Hitch-hiker’s feel. You can read entries from the Forbidden Greeny Jungle Guide on my website that don’t appear in the novel – including real creatures, like the suicide ant!

‘For the Zahrah e-book, I wanted pop-up ads – palm tree banditware, obnoxious recipes by the author – but it had to be exactly as I envisaged it, like in the book, and the technology’s not quite there yet. But just you wait!’

Fast Facts for Free Agents, the book given to Akata Witch’s hero Sunny as she enters the world of wizardry for the first time, is just as unreliable and prejudiced as Zahrah’s Guide.

Nnedi chalks some of this perspective up to her postgraduate studies, especially in journalism.

‘In grad school, I learned a new way of reading. It taught me that you can’t just ‘get information out of a book’. You need to know what forms of information exist, what angle they take.

‘Especially in Nigeria, authors of guide books are often almost yelling at you to convey their perspective –every ethnic group says their way is the best. There are no ‘facts’ in writing about some of the Nigerian villages – it’s always shaped by a perspective, by 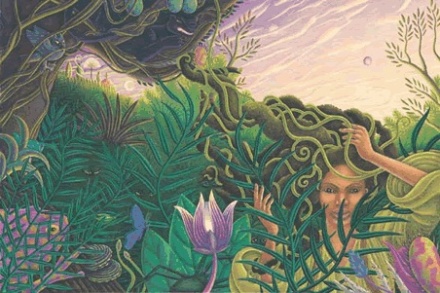 some writer talking down to you – yet these documents nonetheless contain real information.

‘The same is true of Fast Facts and the Guide – they’re examples of how to look at information, reminders to not always believe, and even when you do believe, always consider the perspective of one who gave the information.’

In the fourth and final part of my interview with Nnedi Okorafor, we talk about ways of learning, and the most distinctive inventions of Nnedi Okorafor’s new novel Akata Witch, chittim – a currency earned by learning , delivered as a shower of metal rods falling from the sky.

One thought on “Nnedi Okorafor Interview, Part 3: Palm Tree Banditware – The Future of the Book”