You can find this weekend’s interview with Sue Allsworth, director of San Domingo Savio School in Ayacucho, Peru, here at La Vida Idealist.

Where do we draw the line between animal rights and respect for tradition?
In the Peruvian city of Ayacucho, bull running is a recent addition to an Easter celebration that goes back centuries.

You can find my latest piece, on the revival of the traditional pascuatoro, at http://www.livinginperu.com/features-2126-art-culture-lifestyle-running-bulls-ayacucho-peru

You can catch my latest from Holy Week in Ayacucho – including how I ended up taking an impromptu role in a traditional religious procession – at Living in Peru. 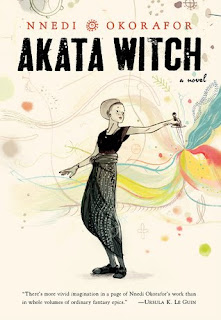 I think Nnedi is one of the most important YA authors writing in English at the moment. Her books blend science fiction and fantasy in epic adventures, which draw heavily on African culture and beliefs. Zahrah the Windseeker, Nnedi’s Wole Soyinka Prize-winning debut, is my all-time favourite book for young people. I wrote on it a few months back, here.
Raised in Chicago by Nigerian parents, Nnedi was a teenage tennis star forced into more sedentary pursuits by a bout of scoliosis when she was at college.
When we met on my recent trip to Chicago, she told me: ‘I would not be writing but for the paralysis. I’d never have thought to pick up a pen. I was only nineteen, really athletic, but scoliosis painted my life.
‘It was like destiny making me write. It was terrible, brutal and completely changed my life in a very specific way. Destiny is brutal, it does not care about you.’
Destiny, and the limits of our freedom to question its demands, is a major theme of Akata Witch.
Its hero, 12-year-old Sunny, is an American-born girl who moves to Nigeria with her parents. As an albino and an akata (a derogatory term for black Americans), she is an outcast within her community. Yet when she begins to develop strange powers and joins the secret society of Leopard People, it seems Sunny may have a part to play in saving the world from apocalypse…
Nnedi freely admits she’s a fan of putting teenage protagonists through the Hero’s Journey as described by Joseph Campbell: ‘I LOVE the hero’s journey. I can’t get enough of it. Coming of age is a magical time, in-between, full of conflict. And writers love conflict!’
What makes Akata Witch stand out from other fantasy quests, is the marginalized quality of the heroic protagonist. Sunny is not ‘the chosen one’ nor even, like Harry Potter, a key player in the battle for the survival of the world.
When Sunny and her friends are sent to frustrate a child-murdering sorcerer’s attempt to summon a monstruous spirit, they are merely one more team in a long line of failed, dispensable young magicians.
Sunny is explicitly told by her elders that she is effectively cannon fodder: ‘The world is bigger than you are, it will go on without you.’
Destiny seems to have brought Sunny from the US to Nigeria to discover her powers, but it doesn’t guarantee her survival, or even victory.
As Nnedi puts it, ‘Destiny has always been something I’ve been fascinated with, but also resisted. Is everything written? And even if it is, can you rewrite it?’
I’ll be featuring more from my interview with Nnedi on Books and Adventures in the month of April, and you can find my review in the forthcoming issue of Brooklyn Rail. Akata Witch is released in the US by Viking Juvenile on April 14th – find out more at Nnedi’s site.
Scroll to Top