Girls who loved the strangeness of pulp SF have grown up and seen that strangeness as a tool for inventing futures where women are free (or become free).

I was excited to discover that Gwyneth Jones has just written a book about the American feminist scholar and science-fiction writer Joanna Russ.

Jones is a brilliant novelist in her own right: particularly notable is her series, beginning with Bold as Love, in which musicians and politicians battle for the soul of a future Britain beset by warring factions. 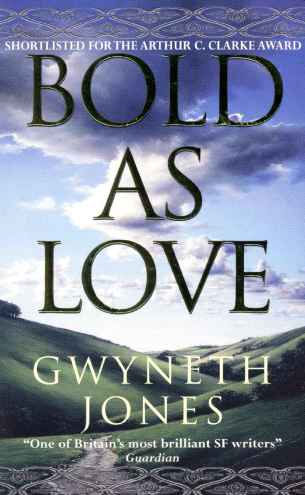 Those books’ blend of Arthurian legend, pop millenarianism, and late-capitalist dystopia is one that I find increasingly troubling as the United Kingdom struggles through its current self-inflicted crisis. Jones’ series drinks from the same waters as novels like P.D. James’ exquisitely frightening The Children of Men, whose English nightmares bug me now more than ever. Her work also speaks to the art historian Aby Warburg’s belief that wild emotions and magical thinking from ancient times continue to lurk in the culture of the present day, waiting to be unleashed.

Warburg lived through the moment of European social turmoil brought on by the end of the First World War, and his fear of political violence led to a dramatic mental breakdown in 1918; today, again, in the wake of economic crisis, with the public sphere awash with distrust and aggressive rhetoric, it doesn’t seem impossible that ancient forces might awaken, that – to put it back in quasi-Arthurian fantasy terms – “the dark is rising” once again.

Maybe in such a moment of threat and uncertainty, we can turn to Joanna Russ for – well, not for comfort exactly (after all, she wrote a novel about a shipwrecked spacewoman who murderously resists her shipmates’ optimistic attempts to colonize an alien world), but a clarity of thought which might dispel fear and put us in a position to act.

Russ’ best known and, I think, greatest piece of writing is The Female Man, an astonishing novel which brings together four versions of the same woman from parallel worlds: one where gender relations approximate those of the 1940s, one resembling ours circa 1970, one where the battle of the sexes has become a brutal high-tech war which degrades all involved, and an all-female utopia called “Whileaway”. Russ’ unflinching and insightful writing, playing across all four of these parallel lives, sharpens our understanding of gender and encourages us to imagine what it would mean to be liberated from the roles into which society attempts to write us.

It’s also very funny. Deriding the possibility of a woman fulfilling all the conflicting and contradictory expectations put on her by society in 1970, and the idea of “having it all”, Russ writes:

I know that somewhere, just to give me the lie, lives a beautiful (got to be beautiful), intellectual, gracious, cultivated, charming woman who has eight children, bakes her own bread, cakes, and pies, takes care of her own house, does her own cooking, brings up her own children, holds down a demanding nine-to-five job at the top decision-making level in a man’s field, and is adored by her equally successful husband because although a hard-driving, aggressive business executive with eye of eagle, heart of lion, tongue of adder, and muscles of gorilla (she looks just like Kirk Douglas), she comes home at night, slips into a filmy negligée and a wig, and turns instantly into a Playboy dimwit, thus laughingly dispelling the canard that you cannot be eight people simultaneously with two different sets of values. She has not lost her femininity.

And I’m Marie of Romania.

The Female Man universe also offers a moment to prick at the sensibilities of 2019 in Russ’ follow-up story “What Did You Do During the Revolution, Grandma?”. This tale explains the “probability mechanics” by which the four parallel women of The Female Man were brought together. In this imagined science, there is a value called Ru, which indicates the consistency of your reality. Cause and effect are only truly reliable at Ru 1.0, and the further you shift from there in your travel to parallel worlds, the wilder existence becomes.

In the story, it is revealed that the world with an Ru 1.0 rating – the “real reality” – is the one where men and women have split into two relentlessly warring factions. Sent on a mission across realities, this world’s agent, Jael, triggers a further round of instabilities and on returning to her “real reality” finds that it has lost its rating of Ru 1.0.

“The centre of reality,” as Jones puts it, “has moved somewhere else” – a feeling that many will perhaps recognise from the social, political, and economic upsets of the early 21st century, in which many things which were taken for granted have proved to be frail, failed, or ailing.

Jones’ book is essentially a survey of Russ’ writing, and she is able to draw connections for us across years, across eras of Russ’ thought, and across the boundaries between Russ’ fiction, academic work, and other critical projects.

So much of what Russ wrote in her heyday remains vital and relevant. Collections like To Write Like a Woman: Essays in Feminism and Science Fiction include material dating back to the early 1970s, but speak clearly and directly to the troubles of the early 21st century.

She writes of technology and the humanities – in the 1978 essay “SF and Technology as Mystification” – in terms that remind me of our current relationship to digital innovation, where terms like “the algorithm” act as a cover for power relations:

Technology is a non-subject.

That is, “technology” […] is the sexy rock star of the academic humanities and, like the rock star, is a consolation for and an obfuscation of something else.

Talk about technology is an addiction.

[…Most people who talk about technology] mean something modern; the Xerox copier or the railroad is technology; the hand loom or the potter’s wheel is not. Modernity appears to be located during or after the Industrial Revolution.

Second, they mean something ubiquitous. Technology is all around us.

[…] Third, technology is not only everywhere; it’s autonomous. It acts. It threatens our promises. It influences. It transforms.

Fourth, technology is often spoken of as uncontrollable. “Things are in the saddle and ride mankind.” It controls us and is dangerous; it can threaten change or destruction.

What is this entity that began during the Industrial Revolution and continued thereafter, that is uncontrollable, autonomous, all around us, and both threatening and promising?

Hiding greyly behind that sexy rock star, technology, is a much more sinister and powerful figure. It is the entire social system that surrounds us; hence the sense of being at the mercy of an all-encompassing autonomous process that we cannot control. If you add the monster’s location in time (during and after the Industrial Revolution), I think you can see what is being discussed when most people say “technology.” They are politically mystifying a much bigger monster: capitalism in its advanced, industrial phase.

a proposal: people-centric language but for algorithms.

Russ’ writing also echoes discussions of intersectionality, the theoretical approach developed by Kimberlé Williams Crenshaw and now widely popularised to capture the relationship between overlapping identities and systems of oppression. In 1995, Russ wrote in terms anticipating the debates I see today on social media about privilege, race, and feminism:

The logic of feminism is to expand inexorably into generalized radicalism […] I came to a whole host of related conclusions, too: that single-issue activism is a dead end, that class, sexism, and racism depend upon each other and that the feminism which doesn’t understand this will inevitably decay into careers for well-to-do white ladies.

Russ remains, then, timely above all things. And she appears here, in my series of blogs suggesting there is “Not Enough Sci-Fi” in our thinking, because of her particular and useful way of understanding the science fiction genre as an intellectual and political tool or weapon:

“Science fiction is a mode rather than a form (a form would be something like the sonnet, the short story, etc). It is basically anything that is about conditions of life or existence different from what typically is, or what typically was, or whatever was or is. It is allied to fantasy […] but is not fantasy – which incorporates as part of its pleasure the impossibility of the material. Science fiction is about the possible-but-not-real.”

“The inability to dream is just what SF is supposed to remedy — and not like pure fantasy.”

“Everybody needs to dream. It is our spiritual and moral guide. Politics certainly can’t be divorced from ultimate goals or ideas about possibilities.”

Russ treated science fiction not as a “blueprint for the future” but a mode of writing that, by balancing elements of the strange and familiar, created the conditions for writers and readers to question the real world and the present day.

Like the scenario planning and foresight practices I’ve been working with lately, Russ’ science fiction is a mode of discussion which allows us to leave certainty behind and reframe our perspective, examining those aspects or elements of our present which we cannot or will not normally bring ourselves to look at.

That’s not just about the strategic blindspots which any human organisation might be expected to develop in time; Russ insisted on striking fearlessly at the very root of the ways in which society structures and restricts us. Gwyneth Jones’ book reminds us that time and again, Russ imaginatively revisited the moment of a woman murdering a man, in order to break a deep taboo and release us all from the traps of traditional gender:

I find it astonishing that so many of us are worried about women’s anger, when a cursory watching of TV indicates who is indulging rage, and against whom. […A]nger is an entirely human, entirely predictable emotion […] it is honourable and we ought to accept women’s anger against men as a potential in every situation […] until the power struggle is won. […] I indeed hate Men and would like to abolish them forever, in the same sense that George Bernard Shaw wished to abolish the poor, ‘and make their restoration forever impossible.’

Playful, ferocious, radical, an intellectual powerhouse, Russ was one of the greatest writers of the last century and her brilliance lives on in her criticism and fiction. Books like The Female Man, To Write Like A Woman, Extra(Ordinary) People, and How To Suppress Women’s Writing belong on your shelf. Even then, there would still be “Not Enough Sci-Fi”, not enough discussion of what could or should be, until the challenges Russ dreamed of and bequeathed to us have been met and even transcended.