>A quick update from New Zealand Book Month (NZBM), which has been extended into April for Christchurch after the recent earthquake.

Sadly numerous NZBM events in the city have been cancelled, including workshops with comic book writer Steve Malley, and the exciting ‘Create an NZ Superhero’ online competition – but libraries are still playing a major part in the recovery effort.

Carolyn Robertson, the city’s Libraries and Information Manager, told Books and Adventures, ‘I think books and library services were absolutely instrumental in helping people cope in the aftermath. The quake occurred on a Tuesday. By the following Sunday, there was a library story teller at every shelter with books, rhymes, and songs. The children’s responses varied from shelter to shelter: at one, they were very hyper and upset, at another they were painfully shy and needed lots of encouragement to even sit on the mat. So the library staff had to pull out all their tricks, and adjust the programme to meet different needs.

‘Parents were having to queue for hours to get money, grants, information and so on, but the presence of our storytellers meant they could concentrate on the survival business and know their children were being well cared for – and within their eye sight.

‘We currently have eleven library sites open and our customers are thrilled to be enjoying these services again. We have stepped up our Mobile Library service, targeting the worst hit parts of the city, roads permitting, as well as taking pre-school outreach and other programmes further into the community. Some of our libraries are being used to accommodate essential council services, but we’re busy looking for ways to establish temporary sites or alternative services where there’s need and demand.”
Carolyn is pleased that NZBM were able to extend their activities for people in Christchurch: ‘NZ Book Month provides events that are fun and don’t involve much financial outlay. One of the things that gets some people down is the endless focusing on the quake and its impact. We also need to escape a bit – and we’re already planning for next year!’ 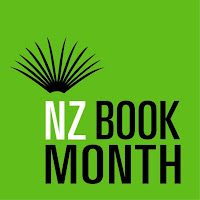 When a teenage photography apprentice picked up a 25-year-old fantasy novel to while away a long train journey through New Zealand, he could hardly have known that his choice of reading would lead to a knighthood and a piece of Kiwi cinematic history.
But for movie director Sir Peter Jackson, J.R.R. Tolkien’s Lord of the Rings would become one of the books that changed his life.
This March, the people of New Zealand are being encouraged to share the books closest to their hearts as New Zealand Book Month announces that ‘Books Change Lives!’
Undeterred by the tragedy of the recent earthquake, the campaign is running over 200 events across the country, from the ‘World’s Smallest Library’ in a Whanganui phone box to a nationwide giveaway of four million ‘Books Change Lives’ vouchers.
Throughout March, Kiwis will find these discount vouchers in their schools, banks, gas stations and letterboxes – a free gift from New Zealand’s booksellers and publishers to readers old and new.
‘New Zealand Book Month celebrates books and reading – all books, any books – and takes that message out to an audience who do not necessarily frequent libraries and bookshops. We have strong ongoing support from committed and passionate readers,’ Book Month director Nikki Crowther told me by e-mail, ‘but we wanted to extend our message to lapsed and occasional readers, and to parents of young children – to remind and re-engage them: with books, and the value that books can bring to all of our lives.’
Across the world, Books and Adventures – always a lover of Kiwiland – has found organizations recognizing the power of the book, especially in the early years of childhood. Australia’s Paint the Town Read scheme, which featured on the blog last November, has encouraged parents to read with their children right from the maternity ward. New York Presbyterian Hospital’s Reach Out and Read program, which I also wrote on for Books and Adventures (here) and DNAInfo (here), ensures that their child patients each receive a book at every clinic visit from birth until the age of five.
That’s not to say that the Kiwi book lovers are being prescriptive with their scheme. Nikki explained:
‘As far as we’re concerned, any book you enjoy is a good book. Choosing a book for oneself is an important step to becoming a passionate reader, and we hope to empower as many people as possible by having them choose the right book for them.’
To help readers find that special book, Nikki and her team have instigated a national conversation around the books that have changed Kiwis’ lives. Not everyone will read a book, as Peter Jackson did, and find themselves making a multi-million-dollar movie adaptation – but many of us have special favorites that have sustained us through significant moments in our lives.
Some of these choices can be very revealing: a British survey of male and female readers in 2006 suggested that men and women had very different senses of what constituted a ‘life-changing’ read, and Nikki Crowther admitted that the results of her survey in New Zealand were equally surprising:
‘So many people voted for the classics! Do people feel compelled to pick what they think they “ought” to love, rather than the books they really couldn’t put down and raved to all their friends about?
‘My first life-changing book was Ballet Shoes by Noel Streatfield. There have been many since – perhaps it was rather cruel to ask other folk to choose just one. I certainly couldn’t. I always reckon that the next book I read will be the next life-changer…!’

While New Zealand Book Month was born among Kiwi publishing insiders, it’s supported by a network of passionate volunteers across the nation.
‘I’m completely awestruck by our “activists”,’ admitted Nikki, ‘in terms of the time, energy and ideas that they put into promoting books and reading in their local communities. We’re taking the message that “Books Change Lives” out to a much wider audience than the traditional places where books exist – so that it touches people sitting at home in front of the TV, or listening to the radio, or visiting their local bank.
‘We hope to promote the notion that books can be a part of everyday life – and that by giving people a good reason to pick up a book during March, we will encourage just some of them into starting a regular reading habit!’
To find out more about New Zealand Book Month and its nationwide program of events in March, visit http://www.nzbookmonth.co.nz/

>Busy times here at Books and Adventures. Caught up in the celebrations for World Read Aloud Day, I managed to turn in a photo story for local Manhattan news website DNAInfo.

You can check out the great work of New York-Presbyterian Hospital’s Reach Out and Read program at http://www.dnainfo.com/20110310/washington-heights-inwood/waiting-rooms-become-reading-rooms-on-world-read-aloud-day