Neill Cameron writes and draws for The Phoenix, Britain’s new weekly comic for children, as well as giving illustrated talks and workshops for young comics creators. 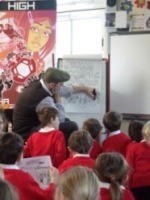 When mainstream comic companies sometimes seem to neglect younger readers, it’s exciting to see a publication like The Phoenix aimed at an earlier age range. Neill’s work for the comic includes a gripping pirates-versus-dinosaurs adventure and a series teaching readers ‘How To Make Awesome Comics’.

Neill joins us now as part of my site’s discussion of comics in education, which you can browse via the comicsedu tag.

Reading comics is a really great way of stimulating and developing literacy – giving kids exciting visual stories that they want to read. But there’s also the whole other side to it, of making comics – so they’re a great way of getting kids reading and writing and drawing; using all these different skills and parts of their brains in one fun exciting stew of creativity.

I run school workshops across a pretty wide range of ages, and the goals and benefits differ across the age groups. With teenagers studying Art and Graphics you can get into some great examples using comics to communicate principles of composition and graphic design, while also getting across the basics of visual storytelling that apply across all kinds of different mediums. And at the other end of the age spectrum, with younger children, it’s more just a question of encouraging their own creativity, of getting them excited about making up characters and stories and understanding that this is not some mysterious or complex process but something fun and easy that anyone can do. 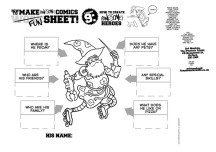 My workshops are mostly focused on getting the participants coming up with ideas; first by getting them all involved in suggesting characters and story ideas while I attempt to draw them and turn them into comics on the spot, and then giving them the chance to try making their own. Some kids always maintain that they “don’t have any ideas”, so I use silly tricks like my idea-generating hat and my absurdly reductive Four Step Story Structure (“goody, baddy, they have a fight, goody wins”) to get them started. I reliably find that once you get kids past that initial reluctance the brilliant, crazy, hilarious ideas start flying thick and fast. And then with older or more art-focused groups I’ll do things like trying to get across some basic principles of figure construction and anatomy. But with robots.

There’s something amazing about the universality of comics; the way we look at a series of images and almost can’t help joining them together into a narrative. And the way comics uses text and images makes them an incredibly rich and exciting medium. But specifically in regard to younger readers, I think there’s something brilliant about the sheer EASINESS of comics. When I was a kid, every Saturday morning we’d go and buy our weekly comics, and then the second we finished reading them we’d carry straight on into drawing our own. That ease of imitability, that low barrier-to-entry, that’s something that I think was lost a bit as comics became a smaller part of children’s media intake. CG-animated movies and cartoons series and big-budget video games offer incredible storytelling experiences, but they’re the work of giant teams and advanced technology and are so incredibly complex and polished that I don’t think when the child puts them down they then think “right, I could do that” the way they can with a comic. 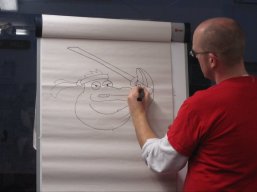 I think the most important thing for educators who want to use comics in the classroom is just to know some good comics. I know it can be really hard for librarians and teachers to know where to start with comics; there are so many, and of course these days there are many that are not necessarily appropriate for children – even comics featuring iconic child-friendly characters like Batman or Spider-Man may be full of content that, while fine for the audience of 30-or-40something lifelong comics fans who’re actually reading them, maybe doesn’t belong in a primary school. There’s a huge wealth of great all-ages comics out there, but knowing where to start can be a problem, and can seem a bit overwhelming to someone without extensive comics-insider knowledge.

and of course, last but not least…

Beyond that, here a few further suggestions: this is a subjective list of both obvious, all-time classic series and a few personal favourites:

And for the slightly older kids…

Thanks to Neill for an informative guest post – with plenty of practical tips and food for thought! Click to find out more about Neill’s work as a writer, artist and educator at his website or browse Books and Adventures’ comic book discussions via the comicsedu tag.

7 thoughts on “Guest post: Neill Cameron on pirates, dinosaurs and comics in the classroom”