This is the second part of a discussion about engaging female students using comic books. Read the first part of the girls in comics discussion here, or browse all posts on comics in the classroom.

Reflecting on girls, comics and education are comics commentator Dee Pirko from Girls Read Comics Too, educator and editor Lisa Fary from Pink Raygun, and Carol Borden, editor of The Cultural Gutter, as well as children’s writer Louie Stowell and Adele Walsh, who runs Melbourne’s Centre for Youth Literature.

I concluded the discussion by asking our panel to recommend good comics for educators and librarians to use with girls and young women.

Dee: Finding good comics for girls is entirely age-group dependent. For younger readers the Fraggle Rock or Muppets series, along with the Tiny Titans and Super Friends, are amazing. When you get to girls closer to the 12-14 age, Bryan Q Miller’s Batgirl series is amazing, and shows a strong female protagonist. Avengers Academy, Runaways, and Young Avengers would suit the 13-16 age group. Finally, Fables, which is a great modern retelling of the fairy tales we all know and love, is appropriate for 15 and older.

series and Richelle Mead’s Vampire Academy have been reconceptualised for the market.  Previous works like Artemis Fowl, The Babysitter’s Club, Percy Jackson, Stormbreaker and even the classic Anne Frank have been reimagined for the graphic novel audience.

The Young Adult Library Services Association releases an annual list of great graphic novels for middle grade and teen readers.  It is through this organisation that I found Laura Lee Gulledge’s fantastic Page by Paige about a girl trying to find her place in NYC after her family uproots from Virginia. Raina Telgemeier’s Smile and Vera Brosgol’s Anya’s Ghost are also fantastic tales that will appeal to teens.

In Australia there is a movement towards presenting Australian voices within graphic novels meant for the younger audience.  Brenton McKenna’s Ubby’s Underdogs portrays his grandmother’s youth as a streetfighter in the multi-cultural town of Broome post-World War 2 and Tom Taylor & James Brouwer’s The Deep: Here Be Dragons presents a family of sea explorers trapped with all their dysfunction in a submarine.  There is plenty out there – you just need to ask questions and become acquainted with people and resources that can grow your knowledge.

Lisa: I think the key is for educators to know their students and be fearless both 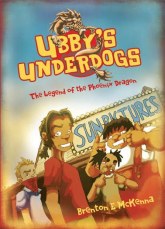 in selecting materials and educating themselves on the wide and rich variety of books that are out there.

For the indie, alternative or artsy teen:  Phonogram, Ghost World, almost anything by Cecil Castellucci, or Bryan O’Malley’s Scott Pilgrim.

For biographical or autobiographical fiction: Persepolis, The Zabime Sisters, Lynda Barry’s collected strips. Gene Yang’s American Born Chinese, and Kim Dong Hwa’s The Color of Earth/The Color of Water/The Color of Heaven, which is a beautiful story of a girl coming of age in pastoral Korea.

Louie: I’d second a lot of the recommendations above. Here are a few more that we’ve not already covered:

For kids and young teenagers:

Oh and, speaking of Rucka, another good comic with a female lead is Queen and Country by him. Female spy, great drama and suspense. Then there’s the very recent (and very dark)  Morning Glories by Spencer and Eisma, which the writer describes as “Runaways meets Lost”. It’s a page turner, probably very good for tempting reluctant readers.

Thanks again to our contributors Dee Pirko from Girls Read Comics Too, Lisa Fary from Pink Raygun, Carol Borden from The Cultural Gutter, Louie Stowell, and Adele Walsh from Melbourne’s Centre for Youth Literature.

Next time on Books and Adventures – an interview with comics creator Neill Cameron.

2 thoughts on “Comics in the classroom: supporting female students, part 2”