“We think we are the lucky country, but what we really have is…too much luck, more luck than we know what to do with.”

The first thing an overseas visitor notices on arriving in Australia today is the relative prosperity which its citizens enjoy. While the British government preaches austerity and American protestors Occupy Wall Street in response to the global financial crisis, the café culture on Sydney’s sidewalks bears testament to the boom Australians are currently experiencing. Though Manhattan itself now struggles to fill its shopfronts, even Australia’s smallest service businesses seem to thrive despite the GFC.

Much of the current boom can be ascribed to Australia’s mining sector, which plays a vital part in national life. Whole towns exist to service the resource industry and mines, as major employers and resource users, bear a substantial community responsibility.

Too Much Luck, a provocative new book by Paul Cleary, provides a compelling argument for Australia to exploit its mineral wealth with caution and 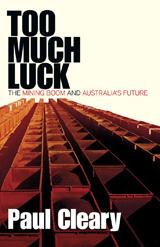 responsibility, pointing to the fiscal prudence of nations such as Norway and Chile as examples of how to sustain a prosperous society thriving on finite primary resources.

Alongside calls for Australia to develop a sovereign wealth fund on a par with Norway’s $600 billion petrodollars, Cleary advances the notion of ‘inter-generational equity’: the idea that present-day society should not leave its descendants worse off. This includes investing in communities and social responsibility, as well as fiscal prudence.

Cleary points to mining firm Rio Tinto as a leader in Aussie community relations since the 1980s, when they switched to a policy of engagement, rather than handouts, for indigenous people affected by mining operations.

Rio Tinto have shown a real commitment to communities, which I experienced first hand when I worked with one of their operations, Northparkes Mines, on the recent Newsvember project in New South Wales. (You can find out more at my Case Studies page).

Although no mining firm’s ethical record is completely beyond reproach – Cleary mentions that the guidelines to Norway’s sovereign fund do not permit it to invest in Rio Tinto, because of environmental damage in Indonesia – the company is pointing the way for corporate community engagement.

Investment in community outreach by Australia’s leading industries is not just for distant future generations: there are pressing short-term needs as a skills shortage looms Down Under.

With strong growth anticipated in jobs across the resource sector, there is an urgent need for sustained increases in recruitment and training, as Skills Australia’s July 2011 report shows. Increasing rates of retirement, the remoteness of resource sector operations and the generic nature of competency-based training packages all present a challenge to the very industries that drive Australia’s current prosperity.

The report emphasises the importance of increasing labour force participation to meet the resources sector’s skill needs, pointing particularly to the underrepresentation of indigenous people and women.

Recruitment from these social groups is also a key factor in the current Australian university reforms, with the recent Bradley Review of Higher Education noting that Australian tertiary education risks falling behind other countries in performance and investment.

Despite these worrying signs, Australians need to recognise how lucky they are right now: the mining boom marks the moment when Australian enterprise has the opportunity to be creative and radical in its approach to communities, skills and education in the widest sense.

Yet the question is: will Australia rise to the challenge and make the most of its status as ‘the lucky country’?

In Sydney I heard of some insipid outreach programmes which delivered only the most routine level of schools/industry partnership: visits by corporate staff to high schools where the staff gave a speech, the children got out of regular class, and there were some follow-up activities to the visit, designed by the teachers.

As a result, the corporate staff didn’t develop professionally as the result of their presentation; the teachers didn’t get the outside input and break from routine that could have been provided by a corporate-led workshop; and the students’ learning was not integrated into their wider experiences in either the classroom or the outside world.

This isn’t good enough for a country as prosperous, ambitious, and rich in potential, as Australia.

As this year’s Deloitte Access Economics report on skills shortages in the Australian resource sector argues: Now, when commodity prices are supportive, is the time to invest in the social capital of education and communities.

It’s time for Aussies to be daring and original, investing in people and in skills for the benefit of all stakeholders in the long term.

It’s time to act now – because they don’t know how lucky they are.

One thought on “We Don’t Know How Lucky We Are: Community Outreach and Australia’s Mining Boom”