Following a successful engagement last year at the State Library of New South Wales, I’ll be returning to Sydney with colleague Brendan Fitzgerald for two workshops in early May.

Librarians sharing plans and scenarios at the end of a long day with me and @brendanfitz at @statelibrarynsw – thanks @myleejoseph and team 😊 pic.twitter.com/GvGVKWsxnb

In our “Library Leaders Workshop Day” on May 4, Brendan & I will help senior library staff to explore a range of strategic tools and techniques. These will help teams think about changing wants and needs in their communities, building the capability to respond with creative local strategies.

Then, on May 5, we will explore ways of defining, measuring, and sharing the difference that public libraries make to their communities, in “Next-generation Measures and Metrics for Public Libraries“.

Join us for one or both of these sessions in May – we’re looking forward to seeing you.

The scenarios I created for Energy Consumers Australia’s 2020 Foresighting Forum, Futures of Heat, Light, and Power – are now publicly available.

In four visions of Australia in 2050, we presented future contexts that challenge current assumptions about how the energy sector works and where it’s headed, with a focus on the experience of the Australian consumer.

In each scenario, we join Josie and her daughter Hannah at their breakfast table, to explore how they live their lives – and how Josie’s role as an energy worker changes – from one future to the next.

You can download the full scenario report (PDF) via the Energy Consumers Australia site, or watch a series of videos based on the scenarios as a YouTube playlist.

Imperial College London’s Dr. Jeff Hardy led a panel discussion unpacking the implications of the scenarios at the Forum, which you can also see on YouTube.

At a critical moment in Australia’s energy future, these scenarios help us to think differently about the world which might await us thirty years from now, and explore both the challenges and opportunities which may exist.

See more from the Energy Consumers Australia 2020 Foresighting Forum at their site.

Stefan Hajkowicz is a principal scientist in strategic foresight at the Australian science organisation CSIRO, leading its Data61 foresight team. I interviewed Stefan for my recent piece on scenario planning in Australia’s magazine for civil servants, The Mandarin – and the full interview is included here.

I began by asking Stefan: What should readers know about Data 61?

We take data driven approaches to strategic foresight, using AI and machine intelligence to analyse data and turn it into stories that help you to make choices.

On an issue like climate change, for example, the science might be well and truly settled, but the social and cultural aspects of our response to the issue are still uncertain – and depending on these choices, we’ll come to inhabit very different futures. Scenarios help us to think through these outcomes.

Both reason and intuition have a part to play, and the best decisions combine both – though no model is 100% perfect. History is our dataset for the future. Although, to quote Mark Twain, history doesn’t repeat itself, it does rhyme. If we can gain the ability to look ahead twenty years, and bring the future forward to now, we can make better informed choices.

END_OF_DOCUMENT_TOKEN_TO_BE_REPLACED

The event brings together stakeholders from across the Australian energy sector, plus international guests, to talk about what lies in store for Australians and their future relationship to energy.

As part of this year’s forum, I’ve worked with ECA to create four scenarios set in the year 2050. Each offers a radically different vision of the Australian relationship to heat, light, and power, intended to enrich current assumptions and strategies by indicating new opportunities and unexpected challenges which may await.

How could technological, social, and environmental developments change the game for Australian energy providers and consumers?

Four future 2050 scenarios will be discussed at Foresighting Forum 2020.

The event takes place on 19 and 20 February at the University of Technology Sydney, and I’ll be contributing video presentations for attendees – but you can also follow along on social media via the hashtag #TakeCharge20.

The scenario documents and materials will be released publically following the event on ECA’s website – stay tuned for more information.

This year, the international Next Library conference holds its satellite event at the State Library of Queensland (SLQ) in Brisbane. Information professionals and librarians from around the world are invited to Australia’s ‘Sunshine State’ to explore questions of innovation, risk, and resilience. I spoke a little about why SLQ is the perfect place to have these conversations in a recent video.

I’ve worked with SLQ since 2016, spending two years with them as their Creative-in-Residence leading special innovation and engagement projects. Most recently, I co-wrote the new vision for public libraries in the state with the University of Southern Queensland’s Dr Kate Davis.

The State Library’s current CEO, Vicki McDonald, became the organisation’s leader part-way through my tenure there, and in 2017 I interviewed her for the Library as Incubator project.

That means it’s a good time to check back in with Vicki and her team – and this week, I interviewed Vicki again. Since she took the top job, what has changed at SLQ? What does she see as the future of libraries? And why is SLQ now inviting the world’s librarians to visit for a discussion about risk and resilience?

END_OF_DOCUMENT_TOKEN_TO_BE_REPLACED

My December 2019 article in Australia’s publication for public sector leaders, The Mandarin, is available here on my site and can be republished freely.

Here’s the full text of “We Can’t Predict the Future, but Scenario Planning Can Identify What It Might Look Like“:

What would it mean to prepare for a future that you didn’t see coming?

Whether it’s the Brexit vote, Trump’s presidency, the global financial crisis, or the changing climate, we increasingly face what some foresight experts call “TUNA” conditions, characterised by turbulence, uncertainty, novelty, and ambiguity. In such circumstances, old models of the future lose predictive power, and our expectations are thwarted.

Scenario planning is a foresight methodology that seeks not to predict the future but to usefully challenge our assumptions about what’s coming next. The pioneering scenario planner Pierre Wack was among the figures who developed the approach in the mid-20th century and gave it credibility through successful strategic counsel at the oil firm Royal Dutch Shell. END_OF_DOCUMENT_TOKEN_TO_BE_REPLACED

I’ll be appearing via video at next month’s 2020 Foresighting Forum hosted by Energy Consumers Australia, the national voice for residential and small business energy consumers in Australia. 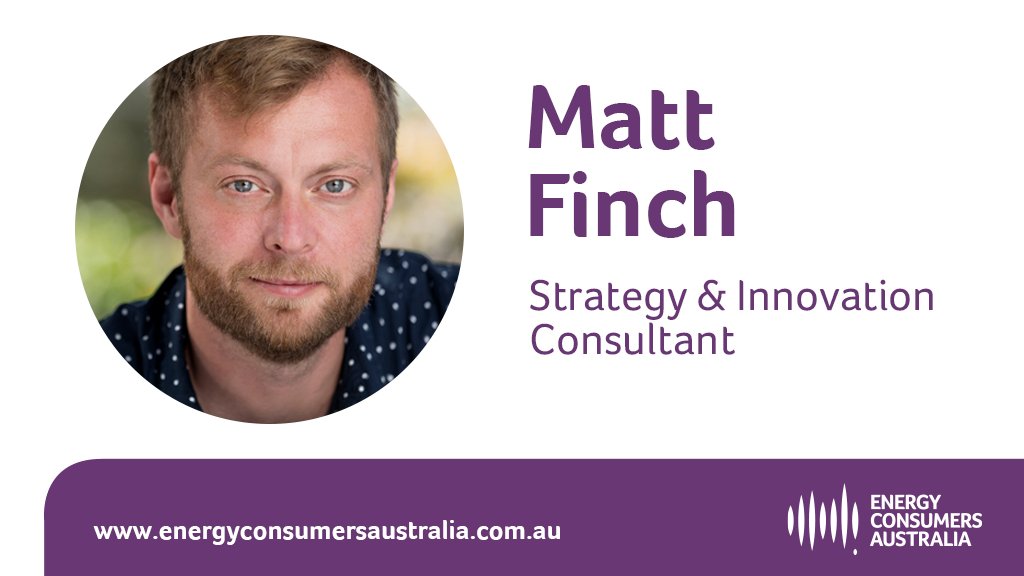 The Forum brings together stakeholders from across Australia’s energy sector to explore long-term questions of heat, light, and power.

I’ll be presenting a group of scenarios, created with representatives of the Australian energy sector in 2019, which could help reframe curent perspectives on Australia’s energy future and the strategic decisions which must be made in the present.

Matt Finch will join Foresighting Forum 2020 via video to play a leading role in the session about the heat, light and power in 2050.

My latest article has just been published in The Mandarin, Australia’s publication for public sector leaders.

“We can’t predict the future, but scenario planning can identify what it might look like” explores the practice of scenario planning, including interviews with practitioners and clients from the OECD, Australia’s science organisation CSIRO, and leadership roles in government and policy bodies.

Visit the Mandarin website to read the article today.

I’m momentarily at rest in my beloved Brisbane, with the sun blazing down in December and bushfires on the news and Leila Taylor’s book Darkly to read.

Taylor’s book, subtitled Black History and America’s Gothic Soul, blends memoir and criticism to explore the places where African-American history, culture, and experience meet the Gothic – from The Castle of Otranto through Edgar Allan Poe to Marilyn Manson.

I’m back in Australia helping organisations to look at their future and imagine what might await them in years to come, using scenario planning. This is a method by which, instead of trying to predict what’s coming, we co-create plausible visions of the future which challenge our current assumptions. Successful scenarios are not judged by whether they come to pass, but whether they trouble, complicate, and enrich our thinking.

And the dots which I can’t quite join yet became visible when I read this, in Darkly: “Gothic narratives were (and still are) a means of working through the discomfort of a changing world through the safety of fiction.”

Which is so close to what scenarios do as to blur the edges of the two concepts. In scenario planning we talk about avoiding the “brutal audit” of a crisis by rehearsing for the things you can’t, or don’t want to, see coming through your current framing of the world.

END_OF_DOCUMENT_TOKEN_TO_BE_REPLACED

I had the chance to interview one of my heroes, the Australian artist and educator Wendy Catling of ettamodern.com, during my recent visit to Melbourne.

The interview comes in advance of a new series of artworks by Wendy which combine narrative, memoir, family archives, and technical experimentation to tell stories of hidden violence, resilience, and renewal.

Viewers and listeners should be warned that Wendy’s work addresses histories of family abuse and domestic violence. Australian listeners affected by these issues can can contact the 24 hour counselling service 1800RESPECT by telephone at 1800 737 732, or online at 1800respect.org.au.