Auckland Libraries has just launched its first online game, City of Souls – an interactive zombie adventure for ages 14 and over.

It’s just an ordinary day in the school holidays, and you’ve been told to look after your little sister Midge. But when the zombie apocalypse breaks out, she gets bitten and suddenly you’re facing a desperate battle for survival. Can you escape the shambling hordes and make it to Auckland city with your mates? Will your little sister be cured or succumb to the zombie virus?

I’m particularly excited by this project because it connects to gaming experiences that teens had in the real-world library. More and more in the digital age, the divide between daily life, stories, and dreams is growing blurry. Two items that got me really excited at work this week were a promo pack for the World of Warcraft online game and a DVD of the Bollywood movie Taare Zameen Par.

Here’s the Warcraft promo pack, which includes chopsticks from the game’s Lost Continent of Pandaria: 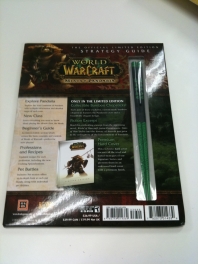 And here’s the Taare Zameen Par boxed set, which includes a flick book and school exercise book as used by the dyslexic boy who’s the protagonist of the movie:

I love that both of these products take items from the screen and reproduce them in tangible form. It gets even more exciting when you imagine communities taking these actions into their own hands and “speaking back” to the pop culture they consume through cosplay, or fan fiction; through crafting their own physical items from a videogame, or entering a genre (like survival horror) through immersive drama and interactive gaming.

Libraries offer an exciting opportunity for us all to imaginatively enter the products of our culture and adapt them on our own terms. Part of the reason I took my contract with Auckland Libraries was their manifesto document Future Directions, which reinvisions libraries as “your space of imagination, learning and connection”. Largely free at the point of service, with a mandate to serve the whole community, libraries can help us all step into the world of story, drama, and content creation.

Toronto’s libraries, in particular, have done some inspiring work in “alternate reality gaming” with Jim Munroe of No Media Kings – who will be on this blog in discussion with Danielle very soon.

In the meantime, the zombie plague continues online – just click to play!

9 thoughts on “City of Souls: Gaming and Augmented Reality in Auckland Libraries”