In part one of this blog series, I took a look at TimeQuest, the citywide programme which I devised for Auckland Libraries’ school holiday programmes – an opportunity to embed storytelling, adventure, and literacy into the life of an entire city.

The TimeQuest team created a simple storyline which all Auckland’s library branches could use as a leaping-off point for their own activities over the holidays. We might have been imposing a half-dozen lines of text, but there’s a real difference between this imposition and the various ‘One Book, One City’ programmes which have gained ground around the world.

I’ve always been about dubious about those, because it feels like imposing taste on an entire community – “You will read THIS TEXT, NOW, CITY; we know better and have chosen for you” – a big clunking fist brandishing a literary canon (number of ‘n’s optional), rather than a fertile ground of diversity and multiple stories. I like my literature and literacy rising up from the grassroots rather than imposed from on high wherever possible!

That’s why TimeQuest speaks more to work like Jim Munroe’s KTR 451 programme in Toronto, in which a short storyline opens the door for a multiplicity of user-driven activities. The 2013 TimeQuest pilot, forming part of Auckland Heritage Festival, opens the door for libraries in New Zealand and elsewhere to lead bigger citywide collaborations with museums, galleries, and other partners.

Part of this comes from the belief that all parts of a city’s infrastructure, physical and otherwise, include space for dreams, desire, leisure, and indolence.

In part one of this blog I talked about how even an organisation as prosaic as local government can demonstrate its commitment to freedom of imagination through its funding of public art – Auckland, after all, is the city whose council believes in an archaeology of dreams.

(For more on libraries, cityscapes, and the use of space, see Baruk on libraries and space and Jessica Begley on desire lines in libraries).

The TimeQuest structure also builds on the idea that children’s and youth librarians, who regularly hang out with teens, orchestrate engaging activities, and perform storytime and rhyme time for preschoolers, already have the skills needed to devise this kind of programme for all ages. I’ve said before that New Zealand, at a similar population to Finland, has the potential to emulate that country’s educational successes in the field of librarianship. The Finns train their teachers to the highest standards and then respect their independent professional judgment – imagine if the Kiwis did the same with library staff!

This belief in respecting librarians’ professional judgement is why Auckland Libraries’ 2013 youth conference focussed on panels of peers (and incorporated a play space for real live teens!), rather than just feting fancy guest speakers preaching from the Powerpoint pulpit.

It’s why our zombie roleplay event in South Auckland drew on make-up and movement resources from the Apocalypse Z theatre group, but told our own storyline rather than borrowing theirs; it’s why City of Souls, Auckland’s online text adventure, was created in-house by our own fearsomely creative staff rather than outsourcing it.

This wasn’t just something that got cooked up in a head office at Auckland Central Library, either; I believe that this kind of 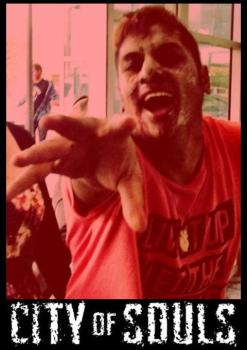 progressive cultural work needs to be done at a grassroots level, by people who have the skills and determination to actually create and deliver the services they envision. And it has to leave the biggest urban centres, the preferred homes of the media and cultural establishments, to appear in neglected spaces: rural, suburban, liminal, deprived.

Librarians of all ranks have got to get out of the shelves and onto the front lines, down and dirty in the trenches of the culture wars. Auckland’s Dark Night festival was created as a response to a terrible Writers’ Festival panel on Fifty Shades of Grey. The city’s librarians rolled up their sleeves and used their skills and expertise to provide performance, curation, and critiques in the field of burlesque and sexuality. In an age of self-promoting “rockstar librarians” and “literary ninjas”, I’d suggest that you only get to call yourself a ninja if you go out on the battlefield in person and kick some serious ass.

Next time on the blog, we go from Aotearoa’s TimeQuest to Australia’s Time Travel Detectives…

2 thoughts on “Finding Library Futures, 2: We Built This City – Embedding Stories in a Community”