Over the past couple of years I’ve run a number of projects testing the limits of the 21st century library – from online interactive storytelling to retail partnerships, live roleplay, and play-based learning for all ages.

With many community libraries in crisis, facing cuts and ignorance about their vital role in public life, the aim of these projects was to swiftly and dramatically push the boundaries of contemporary librarianship, setting precedents that could be exploited and developed after the first flowering.

One of my favourite places to visit during these adventures has been Wellington, New Zealand. Aotearoa’s capital city is small but lively. Its library ranks include the formidable Adrienne Hannan.

NZ Army reservist Adrienne invented the notion of the “Strategic Librarian” – a doctrine which sidesteps old-school leadership thinking to encourage innovation and accomplishment at all levels of a library organisation. Such an attitude is sorely needed if Australasian libraries, sometimes worryingly centralised, are going to avoid the fate of their kin in the UK.

In this guest post, Adrienne discusses some of Wellington City Libraries’ recent adventures on the front line of modern librarianship.

Getting back to human basics with our school holiday activities

At Wellington City Libraries we are intent on bringing stories alive for children and creating interactive experiences with them, so have embarked on a different way of running our school holiday activities recently.

We recognise that books, long seen as the bread and butter of libraries, are just a conduit to literacy, and children may require some kind of stimulating experience with the book to give it memorable context. 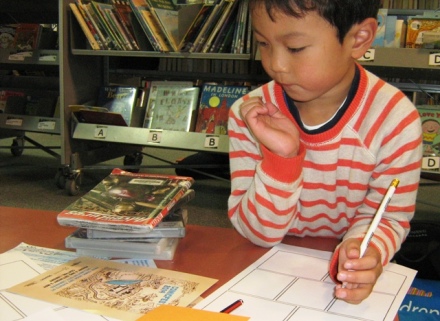 Literacy and books are not one and the same –literacy can exist outside books, and books are simply a useful medium for promoting a type of literacy. Books are a literacy tool that we can make more valuable by creating a fun experience around them. We love to explore literacy in all its formats and through a variety of mediums, and our favourite challenge is coax the stories out from between those two covers and bring it alive for the children. It’s amazing watching them take part in the story, play the characters, decide the plot and the ending, and in the end appreciate books more by recognising them as a vehicle transporting something amazing.

We strive to show children that books are not a two dimensional, static and solitary activity – they can become anything they want with a little bit of creative thinking.

We also recognise that there is a lot happening today that is competing for children’s leisure hours during the school holidays. It’s no longer enough to just have an super-storytime in the library – we need to modernise, be exciting and surprising, and focus on what we do best – being a flexible community space that full of endless adventure and fun ways of learning.

So we’ve been trying something new…

In October 2013 we had box forts in the library. Each library running the event was tasked with coming up with some kind of back story to give context to the activity. For example Island Bay Library, located near the City’s south coast beaches had a pirate invasion. Pirates had landed and were making their way towards the city centre to take of the capital city of New Zealand. The children at Island Bay were tasked with building the last line of defence and stopping the pirate’s advance. They were provided with books about forts and castles, books about pirates (so they can learn about their enemy), and piles of cardboard boxes, tape and markers.

The children (and their parents – who couldn’t help but join in themselves) planned the defences, built them, and then defended against the marauding attackers. The children assumed roles within the story and eventually defeated the pirates, thus saving the city. Likewise the city was saved by aliens invading our northern suburbs by the brave children at Johnsonville library. NB – turns out the aliens were friendly and bombarded their fort with handfuls of lollies rather than death rays! Afterwards children were encourages to write the story of their forts in a short fiction piece.

Unfortunately we had some complaints – the adults of our city felt like they were being left out and that children were having all the fun. So we had an adult fort building night at one of our libraries with amazing results. 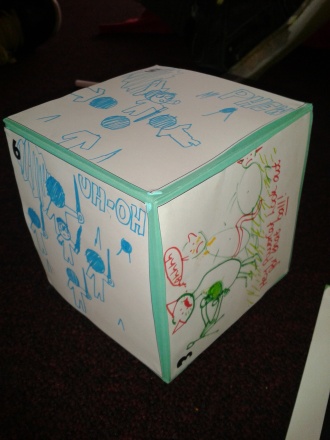 In April 2014 we focussed on comics as the school holidays coincided with Free Comic Book Day on May 3rd. Comics are a format filled with incredible characters, personalities and backstories, and this was the element that we wanted to focus on. We had children designing their own superhero, and making ‘comic book dice’ to craft a story using their character. Once the character was designed (which involved creating a costume, super powers, a name, their background story and an arch enemy), the children made up a dice with a scene drawn on each side of the dice. This built on an activity Matt Finch had devised at Manila’s Museum of Contemporary Art and Design last year.

The children had lots of fun rolling their die and crafting stories for their character. A combination of die could lead to an Avengers or Justice League-type scenario with many heroes in the same story. During the sessions our comic book collection was examined to inspire the character creation and the scenes on the dice. Our central library did things a little differently – once the character was created they rolled a giant dice and the number that came up corresponded with a starting scenario for their character, which was then used to draw a comic strip.

The July 2014 holidays had an art focus. This was an attempt to explore story and communication from a historical point of view, recognising that renaissance art was an early visual communication method (in the pre-literate days) and often contained complex stories. Our activities were very hands on and messy, and extremely fun, inspired by the work of Tracie Mauro over at Parkes Shire Library in Australia.

The children were first introduced to Renaissance art and the time period it was produced in. They explored the stories of the key players – Michelangelo, Da Vinci, Donatello etc. – and examined some of the famous works while discussing the stories contained within. They next had a go themselves. Using images of Renaissance art for inspiration they lay on their backs under chairs and tables and painted (we taped paper to the undersides), pretending they were Michelangelo painting the Sistine chapel ceiling. Some of the libraries read a story set in the Renaissance period aloud as the children painted, tasking the children with painting the illustrations as they listened. Afterwards the link was made between historical art and modern illustration, by comparing the old works to our picture book collection.

Coming up we have the October holidays, and we are running with a science theme. The idea is to create a story, or use an existing one from our collection, and interrupt it with science experiments. For example – a story about an alien invasion would be told/read by the librarian, and at crucial moments the story will stopped and explored with science – how to make the most efficient ‘space fighter’ (exploring the aerodynamics of paper aeroplanes), then repelling the aliens with missiles (making bottle rockets), or gathering intel on the aliens by exploring sensory system (experiments with the five senses).

After the experiment the story is picked up again and continued until the next crucial moment for an experiment. Another story could be focused on a bush survival adventure (such as a classic Willard Price book), with experiments that demonstrate how to make a compass, find out which materials float best and could make a river raft, or some experiments about insulation so the protagonist is more likely to survive the cold night in the bush. A crime story lends itself well to forensic science. We are going to break open the stories into real-life scenarios for the children, bring the story alive and make it dynamic and involving, and along the way they will get to experience and learn useful knowledge in a fun context.

We are already looking ahead to April 2015, and are considering a movie and special effects theme (making best use of Wellington’s thriving film industry). Films are rich in visual storytelling, and many of the best are based on books, so there is a strong and clear connection.

We wanted to bring more value to our activities than mere craft – it was no longer enough for us to read a book about pirates and then make an eye patch. We decided that we are better than this. Children live in a world where they are highly stimulated – everything is interactive, visual, and can be shared and experienced communally. 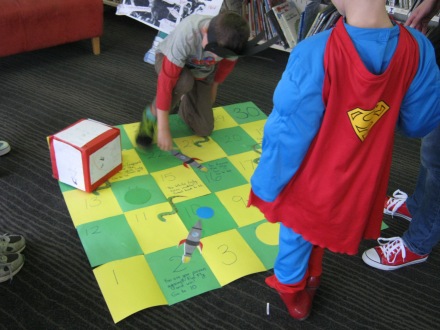 As humans we are meant to share, interact and experience things together – we are tribal in nature, and our survival throughout history has depended on it. Modern technology is actually more aligned than not with our natural instincts to communicate and share, and is extremely appealing to children. Books, in comparison, can easily be seen as boring. Libraries and books have long been promoted as places and things that you do quietly and individually – a quality reading experience is seen as one that was completed quietly without distraction and on your own. This goes against our basic human instincts of congregation, visual and verbal sharing, and interacting with each other; our natural methods of learning. Our holiday activities are attempting to combine the best of libraries with the best of human nature to achieve an exciting result.

To find out more about the activities Adrienne’s been running at Wellington City Libraries, check out the  2015 Library Innovation Toolkit, and Adrienne’s own posts on The Strategic Librarian at this site.