In this interview, I’m joined by the British comics creator Neill Cameron, whose books for young readers include Pirates of Pangea, Tamsin of the Deep, Mo-Bot High, How To Make Awesome Comics, and three volumes of the acclaimed Mega Robo Bros – as well as an ongoing daily webcomic for older readers, X365, which has been appearing throughout 2020.

We talked about creating convincing future and fantasy worlds, getting to know imagined places by drawing them, and the contrasts between the vision of 2020 we were promised as children – and the turbulent realities of the year as we’re experiencing it.

END_OF_DOCUMENT_TOKEN_TO_BE_REPLACED

After my discussion with New Zealand Educational Gazette and our recent features on NZ’s use of comics in education, it pleased me to see one Kiwi don the Caped Crusader’s cowl for a light-hearted prank during the Rugby World Cup.

TVNZ reports that a man in full Batman regalia visited a Christchurch police station demanding to see the commissioner and know why the “Bat-signal” – the White Lights of Hope commemorating the recent earthquake – had been lit. He’s not even the first Kiwi Batman, as the name has apparently already been applied to a 91-year-old community patrol volunteer in Waipawa.

The quakes’ impact on the Christchurch community is discussed from a literacy and outreach perspective in the recent Books and Adventures interview with Carolyn Robertson of the city’s library services.

Wonderfully, the Kiwi police appear to have responded to the Batman prankster with good humour. I’ve no idea if it’s deserved, but they’ve been building a reputation for tolerance and light-heartedness ever since an officer appeared on TV reminding a suspected carjacker to “always blow on the pie” when eating hot food from a late night convenience store.

You can find all the recent Books and Adventures posts on Comics in New Zealand Education here: 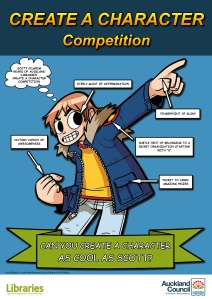 As September comes to an end, Auckland sees the grand finale of Comic Book Month, a celebration of graphic literature across the 55 public libraries of New Zealand’s Super City. Books and Adventures joins them for another in our current series on comic book education in New Zealand. You can find my original piece for the New Zealand Education Gazette here.

Comic Book Month co-ordinator Pip Henderson from Auckland Libraries’ Youth Service Development explained why she and her colleagues chose to focus on comics for this month-long celebration:

“Our customers like to immerse themselves in stories in different ways other than purely print; there are many ways to tell a story!

“Comics were once thought of as an easy read with little substance. Parents, especially, were keen to move their kids away from them but many are now seeing the value. Comics can be just as challenging for young readers, and just as beneficial in terms of concept comprehension and vocabulary extension as a chapter book.

END_OF_DOCUMENT_TOKEN_TO_BE_REPLACED

Today as part of our ongoing feature on comics in New Zealand education, we’re joined by the New Zealand children’s author, editor and educator Raymond Huber. You can find out more about him and his great books, including the Ziggy Bee stories, at http://www.raymondhuber.co.nz/

Here’s Raymond on ‘Comics in the Classroom.’

The thought of comic books in the classroom is frowned upon by many teachers and parents. Comics still have an image problem with many adults – a mistrust of the comic format based on suspicions about quality, content, and most of all, literary value. There might be a grain of truth in the first two: comics used to be cheaply produced, and they can contain offensive material. Some comics do take the Readers Digest approach to literature, but there are also many that now take the comic form to its own artistic heights, especially comic picture books and graphic novels.

Why use comics in the classroom?

Perhaps the best reason is that children love reading stories in the comic form. Consider the Tintin books, selling over 120 million copies, and public libraries often put a limit on withdrawals of the books. Given a choice in class, many children will grab comic picture books before novels. And most of these readers will be boys – another great reason for using comics in class.

END_OF_DOCUMENT_TOKEN_TO_BE_REPLACED

Alfriston College is a Decile 3 school in South Auckland, serving a mixed population of Maori, Pacific Islanders, pakeha and other immigrants.

Working with Jeremy Bishop of DMC Comics – interviewed here on Books and Adventures – Alfriston has produced some striking comic book work thanks to a pioneering project that empowers students and gives them a platform for their creative expression.

Set out in the South Auckland suburbs, Alfriston College is determinedly non-traditional – it’s referred to, by critics and fans alike, as “that place where they play music instead of ringing a bell 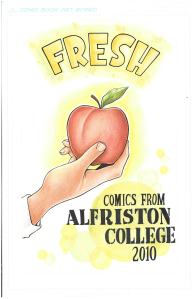 between lessons”. The school’s philosophy is to use the latest research to deliver education for the 21st century. Innovations include a timetable of three 100-minute lessons a day, and termly ‘Three Day Episodes’, when students are given time to work on a self-selected project.

As Deputy Head Steve Saville puts it, ‘We’re trying to cultivate things a little bit outside the box. Authenticity and imagination are our watchwords. Traditional schooling was failing disadvantaged communities, and particularly the Maori, so why use it in a brand-new school?’

A British-born teacher with experience in both schools and universities, Steve arrived at Alfriston four years ago as Deputy Principal with responsibility for curriculum, bringing with him a lifelong comic-book obsession.

END_OF_DOCUMENT_TOKEN_TO_BE_REPLACED

Today, Books and Adventures continues a series of posts exploring the use of comics in New Zealand education. You can find my New Zealand Education Gazette piece on the subject here.

A fine arts graduate turned tattooist, then comic book creator and novelist, the American Steve Malley was already a wandering soul before a tattoo commission from a Christchurch librarian drew him into the world of New Zealand comic book education.

Minnesota-born Steve abandoned a career as an artist in the US to develop his skills in tattooing, eventually taking his trade to a new home on the South Island of Aotearoa.

Steve wandered into educational work after doing a full sleeve tattoo on a librarian, as he told me over a pint on the outskirts of Christchurch’s quake-shattered Central Business District back in May.

END_OF_DOCUMENT_TOKEN_TO_BE_REPLACED

Today, Books and Adventures continues a series of posts exploring the use of comics in New Zealand education. You can find my New Zealand Education Gazette piece on the subject here.

Publisher, bookstore manager, and former youth librarian, New Zealand’s Jeremy Bishop is a devotee of graphic literature whose passion has led him on an educational crusade to find the Kiwi comics creators of the future in Auckland schools.

Jeremy’s passion for spreading the word into schools is evident as we talk one busy lunchtime at Gotham Comics, the Auckland store which he manages. In between serving regular customers and hurrying his way through a sandwich, he explains:

‘Comic books are a great medium for education. They’re creative and innately interdisciplinary – bringing together English, art, media studies, but also history and social studies. One kid in our workshops pitched a story based on his history coursework – retelling the story of Genghis Khan….on Mars!’

END_OF_DOCUMENT_TOKEN_TO_BE_REPLACED

My discussion with New Zealand Education Gazette Editor Geoff Vause can be found in the print-only curriculum support supplement to Volume 90, Issue 17 of the magazine, out today.

In it, we talk about New Zealand’s leading role in the use of comics in the classroom.

You can see more on using comics in the classroom under the comicsedu tag on this site.

Kiwi use of comics in education outstrips even that of New York, the hub of the global comic-book industry, according to British educator Dr Matt Finch.

“With its small population, New Zealand encourages contacts between comic book professionals, educators and students in a way that few larger nations can match – and with visual literacy a key element of today’s NZ arts curriculum, Kiwi comics are a more valuable educational resource than ever,” Dr Finch said.