Evil begins when we begin to treat people as things.

I bought a toy at the weekend. It was a cheap little thing, an impulse buy in the supermarket queue. Although I’m a very geeky man, I don’t normally buy toys. I’m not a keep-it-mint-in-the-box sort of person; nor am I interested in filling my house with pop-culture statuettes.

I bought a Transformer, so you could say this is about nostalgia: Hasbro started selling Transformers when I was four years old. At least these days, in some corners of the media, Transformers are a pretty progressive brand, with same-sex couples, female robots, and a storyline that goes beyond goodies and baddies.

But I didn’t buy a Transformer that I remembered from childhood; I bought a new one, called Windblade, who had her own comic a couple of years back.

Windblade is a Cityspeaker. Some Transformers live inside communities which are themselves giant, ancient robots, unable to speak and communicating instead through arcane symbols. For these people, Windblade serves to interpret the thoughts and feelings of the place they live. That doesn’t make her the leader, or the counsellor, or the Grand Vizier: it just means her job is to listen, and try to understand.

I bought the Cityspeaker for our office, because we’re currently brainstorming a year of technology-themed programming for 2017, after I’ve finished my residency in Queensland. Our ideas board is plastered with pictures from sci-fi and technology projects, images of the imagined future, exhibitions in galleries and museums from around the world.

Not that the future looks at its brightest right now. It’s been a scary week for global news. In the wake of the Florida tragedy, America’s presidential campaign continues to look frightening. Britain seems close to marching away from Europe on the basis of xenophobia and ignorant imperial nostalgia. And the Terry Pratchett quote that opens this piece came from a social media post about the death of the British politician Jo Cox, who was stabbed outside a library by a man who may be mentally ill, may be associated with the far right wing, but who has certainly been treated in different terms to others who would have been branded as “terrorists” in the same circumstances.

In any case, this callous attitude to the taking of life begins with seeing other people as mere objects.

At the University of Southern Queensland earlier this month, I argued that we needed to listen more – not just to each other, but to those we exclude from our professional conversations, those we forget or ignore, and even the material world around us.

In saying this, I drew on the work of two thinkers connected to Columbia University: Sean Justice and Beth Povinelli. My friend Sean, a technologist and educator who received his doctorate from Columbia, encourages people to think through materials: that is, to look at what constraints and directions an object imposes on us or suggests to us when we use it. Material here can mean anything from a blob of paint to a switchblade or stepladder or a technological device like a smartphone. Or even just a smear of Vegemite on a piece of cheese, guided by a hand with appreciation for its consistency and its properties: thinking wordlessly through the medium of food.

Sean’s interest in digital devices is very relevant to me right now. My girlfriend Marta – author of the Vegemite pic – is on the other side of the world, and we communicate by email, text messages, FaceTime and Skype. I find myself in the strange position of blowing a kiss at a camera lens, so that it can be translated into a signal, bounced off satellites, and appear on a screen thousands of miles away.

If Sean, operating within a broader scholarly trend which we can call the ‘new materialism’, is right, then we need to listen to machines as well as people, because their very nature shapes our behaviour and speaks back to us, even though they are inanimate objects.

As was said in our discussion of Aussie farming technology a few weeks back:

…the nonhuman entities with which we share the world – including, but not limited to, our tools – are active in their own right. They have their own powers, interests, and points of view. And if we engineer them, in various ways, they “engineer” us as well, nudging us to adapt to their demands. Automobiles, computers, and kidney dialysis machines were made to serve particular human needs; but in turn, they also induce human habits and behaviours to change. Nonhuman things must therefore be seen as…active agents with their own intentions and goals, and which affect one another, as well as affecting us…

…Things are creative. And again, one of the great potentialities of science fiction is to illuminate the positive, productive powers of things, of materials, and of technological apparatuses.

Beth Povinelli, artist and Franz Boas Professor of Anthropology at Columbia University, takes this further – and applies it to the land on which I find myself, this great continent of Australia.

Beth’s “anthropology of the otherwise” and her artworks challenge our assumptions about life and nonlife, subject and object, in a postcolonial setting.

She suggests that in Australia, a Western colonial culture which saw the landscape as an object to be acted on came into conflict with Indigenous worldviews which often granted more respect, agency, and identity to the land. The resource industry in particular has used the Australian continent in a way which was inimical to the values of traditional owners of the land.

Now, as climate change warns us that the Earth is not simply an object to be acted on as we see fit – as the plant demands we listen to it, or suffer the consequences – Beth calls, on behalf of those communities who she listens to, for us to acknowledge and respectfully study Indigenous worldviews:

[To listen better to Indigenous communities, non-Indigenous people and institutions must] stop thinking about Indigenous understanding of the world as cultural. Culture and cosmology interpret Indigenous world-making as in their heads, as belief, rather than a mode of truth. […] Western sciences are now struggling to re-suture the cut between biology and geology, biochemistry and geochemistry.

Indeed, a new interdisciplinary literacy is the only hope for finding a way to square our current arrangement of life with the continuation of human and planetary life as such. Scientists, philosophers, anthropologists, politicians, political theorists, historians, writers, and artists must gather their wisdom, develop a level of mutual literacy, and cross-pollinate their severed lineages. Entirely new disciplines in the natural sciences are emerging—geobiochemistry—and Western philosophies are returning to the question of ontology, but now through Indigenous multinaturalisms.

The work of Beth Povinelli and Sean Justice reminds us that it may not be enough to avoid treating people as things; we may be coming to a point where we have to treat things as carefully as we treat people, with love and respect and thoughtfulness. Those digital devices which promise so much for our future are made from resources mined out of the ground, in countries often caught in a bitter colonial history. As Beth says:

…there should be humane mining, in the sense of treating nature humanely, whether a rock, river, or sandy plain, in a similar way many demand humane slaughter houses. Of course, we’re still slaughtering, but we’re now not differentiating as sharply the destruction of an environment from the killing of various life forms. Nonlife forms are beginning to be granted rights.

All of which brings us back to the toy I bought today: a silly plastic trinket, a waste of oil perhaps, a woman who is a robot that listens to sentient cities. A childish hero, an office decoration, and a mascot for a library dreaming of the future.

Windblade’s story crosses over with another Transformers comic featuring my favourite character, Rung, a robot psychiatrist who is useless at the kind of fisticuffs and gunplay which usually define the Transformers’ battles. He is kind, thoughtful, melancholic, and often overlooked by his friends. He’s also a machine, and like almost all of the Transformers, he can change form from a humanoid into another mechanical device.

Most of the Transformers become cars or planes, sometimes other vehicles or guns or occasionally metal beasts and dinosaurs. But nobody knows quite what Rung becomes. 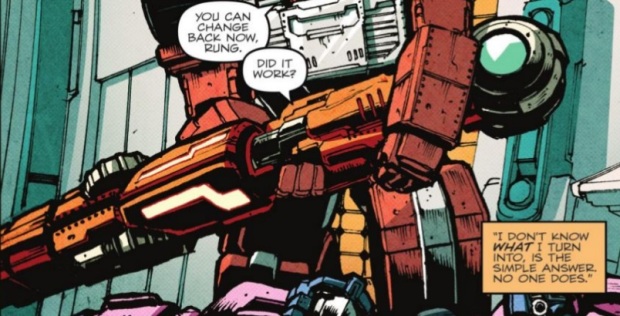 His “alt-mode” is a quirky peg-like shape which doesn’t suggest any particular purpose. When a tyrannical regime of “Functionists” try to impose a class system based on the characters’ alternate forms – manual devices like construction vehicles or mining tools sitting on lower strata than microscopes or aircraft – they are confounded by Rung and are forced to assign him a special category: “ornament”.

In my sillier moments, I wonder what someone like Sean Justice would say if he could step into the story of the Transformers and meet someone like Rung. I love the idea of a Transformer that doesn’t become anything much, that refuses to be defined by their function. Like Windblade, the new toy I bought to sit in our office, Rung shows his worth by listening to his friends and foes, by trying to understand and forgive and help make things better.

Windblade has come to my office today as we’re visited by the Minister for Science, Information Technology, and Innovation, Leeanne Enoch. Minister Enoch is the first Aboriginal woman elected to the Queensland parliament and also its first Indigenous Australian minister.

Although the Transformer is only a toy, a little piece of make-believe, I’m glad she can be part of our special day. I hope she listens carefully and judges us kindly.

One thought on “Thinking the future through toys”