A guest post by urban planner turned librarian Jessica Begley. What can libraries do to help users make the most of their spaces?

I have been fascinated by how and why people use space, and how subtle design can influence behaviour, for as long as I can remember.

As a teen, I merged this interest in social geography with psychology and came up with a degree in Urban Planning and Design.  I was going to change the world. Improve open spaces. Create spaces people felt happy in.  The reality I found was far from my planned dream. Rows of brickwork, overshadowing, trellis screens, and complaints all dominated my day.  Not even I liked the spaces I was approving.  Approving, not designing.

Fast-forward fifteen years.  I am still an urban planner, but only in my mind.  I have been trained to look at spaces, movement of people, land use, all in a certain way.  I can no longer look at a space like an ordinary person. Taking my kids to the shops, the park, the library, I analyse the flow of movement through space.  When I see conflicting uses, I see a design-based solution. When I see desire lines – the unplanned paths naturally taken by people in any setting – I read them.

Desire lines fascinate me.  They ask us to stop, look and realise that what is existing is not ideal.  No matter where we put a concrete path, people will take their own route through an urban environment.  The route they take represents their optimal use of a space.  Worn grass, trampled garden beds, dirt tracks, all signal desire lines that represent where the designers have got it wrong, or where there is an opportunity to get design right.

You can see more on desire lines in general at A Brooklynite on the Ice blog and the Landscape Institute website. 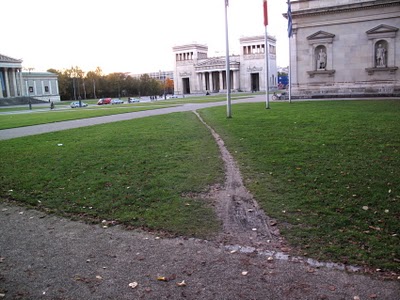 My career change means that as a librarian, I now create spaces that affect people’s moods, movements and uses in ways that were never available to me as a planner.

In libraries, conflicting uses of space can be separated by forethought and planning. Conflicting land use is a first-year urban planning conundrum. Factories and houses? Don’t mix, separate them.  Schools and brothels? Separate them too! The most common separations are distance and buffers.  Land use buffers are often those uses that cause no offence.  In a library, they can be shelves, access paths, displays.

My local library staff in Canberra wonder why they have conflict between users.  In my local branch, the best natural light is in the Young Adult and Graphic Novels area.  It has been perfect for the nearby students to use for years. Tucked away, this section of the library offers privacy, physical separation from the rest of the library, and tables taking advantage of the natural light where students can often be found drawing, writing, being creative.

Now, however, the elderly knitting group meet in this area.  Why? For its natural light.

I have nothing against crafty types. I myself knit. However, this situation highlights the poor planning of conflicting uses.  The knitters love using this area.  It’s near the door.  There are no pesky, noisy and unpredictable small children.  In fact for half a day a week not only are there no pesky children there are no pesky teens either.  There is no-one using the YA area, because of the knitters.  They have gone with their desire for natural light and made the area their own.

Gungahlin library in Canberra’s north has been planned as a purpose-built facility.  Each user group is catered for and separated appropriately.  Consultants were given a very reasonable budget to create an ideal environment.  Other branch libraries do not have the luxury of starting from scratch however.  The same organisation that are responsible for Gungahlin library are also responsible for the unresolved user issue at my local branch.  The same organisation that can’t reconcile the desire lines of the students or of the knitters.

Instead they move furniture to delineate zones, erect signs to direct movement, and ask patrons to leave.  My branch library has several conflicting uses poorly placed in the library, and struggle to recognise this.  They have the quiet newspaper reading area next to the children’s story time area.  The students’ working computers next to the LP fiction – complaints are just waiting to be made about noise and language particularly with this arrangement.

These poorly thought out choices create conflict.  They increase the workload of the library staff.  Increased numbers of complaints about the students come in every month.  This is not about the users per say, but about the spaces we as librarians are providing them with.  What do the students’ desire lines say about their use of the library?

The teens use the back door, not the front door. They keep to the edges of the space, rarely crossing the centre.  They seem only to sit in the central area in large groups, talking loudly, feet on tables predominantly when?  When the knitting group are invading their territory.  The students told me they come for the collection, the solitude, the safety, the wifi, and the opportunity to meet friends.  If the behaviour of the users could be observed, and the desire lines respected, there would be no need for a costly retrofit, an expensive consultant, a review committee.  Budgets could instead be spent on the library collection, programs, activities, and brilliant staff.

When I wanted to extend my house, I called in an architect.  She was able to take my brief about how we use our space and to create a built environment that took advantage of the opportunities of the site and addressed the constraints.  Who better to advise on the use of a library space than the librarians themselves?  As a planner, my in-grained focus is on land use planning.  As a librarian, my focus is on the users’ experience.  That all users are created equal is my basic premise.  Urban planning analysis and common sense can achieve more than a retrofit, at a fraction of the cost, and in a weekend, simply by taking the time to read the visible desire lines of each user group, and even involving them in the overall outcome.

Jessica Begley has a first class honours degree in Urban Planning and Design from the University of Melbourne. After project work for the Australian Library and Information Association, she was bitten by the library bug, and is due to complete her Masters in Information Studies (Librarianship) at the end of 2013.

Jessica has explored the relationship between youth and the use of space through research, and has served on the Committee of Management for the Playgrounds and Recreation Association of Victoria.  Jessica can be contacted via Twitter at @jessincanberra.

For more on library design, see my post Drink Your Way To Better Librarianship and my interview with Oxford’s indie music store and venue, Truck Store.

3 thoughts on “I believe in Space…and Desire: Jessica Begley on library design”