Once again, it’s busy times over at Finch Towers. I owe this blog a report on Time Travel Detectives and Big Box Battle, two immersive roleplay activities that I’ve just run at Parkes Library. That’s coming, but in the meantime you can see a few photographs from the two events below. There’s no qualitative assessment quite as cool as the awestruck expression on a child’s face…or the air-punching victory of a seven-year-old girl who just took down a chainsaw wielding Elvis robot.

Next week sees schools from around Central West New South Wales converge on Tullamore for the sequel to 2012’s zombie showdown, and after that I’ll be speaking in Manila and Sydney.

In Manila, I’ll be running a youth activity for the Museum of Contemporary Art and Design, (MCAD) as well as speaking to Filipino librarians on strategy and innovation. MCAD made a rather beautiful poster for the event: 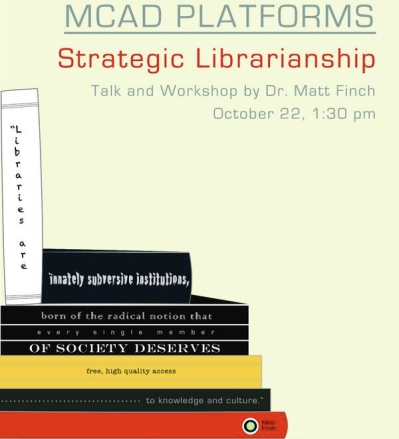 After that, I’ll be speaking at a New South Wales Writers’ Centre event on Thursday 24th October, Monsters Under The Bed, alongside novelist Kate Forsyth and researcher Nyssa Harkness. We’ll be looking at the place of monsters in children’s and Young Adult fiction – and with Nyssa’s gaming background, I’m hoping we get to explore whether our relationship to monsters changes in an age when interactive storytelling and gaming often allow us to struggle with them directly… You can order tickets for the event at the Writers’ Centre Eventbrite page.

And when all that is done, I have a few words for you on immersive roleplay, performance and literacy, and embedding stories in a community. Stay tuned…