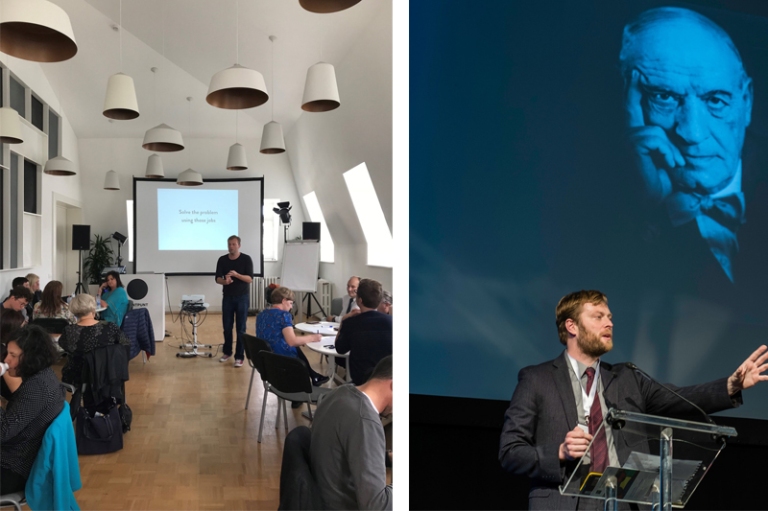 You can read more over at the ILX website.

Well, that’s it for the current stint in Australia. We’ve achieved so much at the State Library of Queensland (SLQ) and University of Southern Queensland (USQ) since I came over for the initial 12-month residency in January 2016.

I’ve a few more gigs in London before Christmas, and then some exciting announcements to make going into 2018. Watch this space.

Hard to pick out highlights from the past two years, but among them I’d say:

But really there’s been too much to mention. (Like the roadtrip. The roadtrip!).

You can see some highlights here:

Thanks to everyone who made these projects possible and worked hard to let our teams explore all things wondrous and strange.

A set report from the upcoming Thor: Ragnarok gives us a healthy reminder about what creativity really is.

The best line in the trailer comes not from screenwriter Eric Pearson, nor director Taika Waititi. It wasn’t even improvised by one of the actors.

The "friend from work" joke was improvised by a make-a-wish kid that was on set the day they were filming. This just made the line better. pic.twitter.com/hgLyvDB9Wj

END_OF_DOCUMENT_TOKEN_TO_BE_REPLACED

Jane Cowell, who hired me as Creative in Residence at the State Library of Queensland 2016-2017, has five reasons why your organisation should create such a role over at her Medium account. 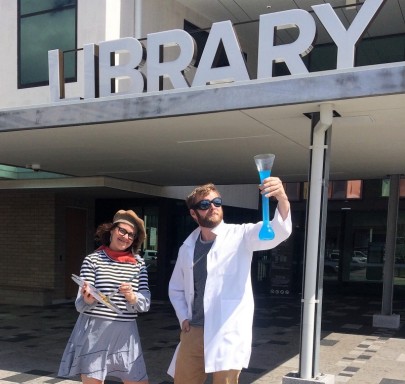 1. Be passionate
Your job is to make good use of the unexplored gaps in an institution’s existing procedures; to be opportunistic, inventive, and positive about the merits of innovation. Like a catalyst in chemistry, your presence reduces the energy required for new reactions to happen. Your passion for the role and personal commitment to constructively challenge the status quo will play a large part in determining your ultimate success.

That might mean midnight phone calls across timezones to pick Canadians’ brains about Human Library projects; or driving a State Library web team to devise, develop, and then share the code behind an online comic maker. Caring enough to go that extra mile is a huge part of this role.

2. It’s not about you
I always remind my clients that your pay grade doesn’t determine how creative you are; it just reflects your responsibilities. Great ideas can come from anywhere in an organisation and we need a diversity of perspectives, from client-facing staff to policymakers, ancillary workers, and digital specialists, when we help our organisation respond to changing circumstances. A Creative-in-Residence role is also about paying attention, brokering partnerships, and supporting others in putting forward proposals like the FaceSwap Lab pitched by a State Library project officer.

.@jjsttn is also the mastermind of this Saturday's @slqld @funpalaces faceswap sessions, letting people play with our digital collections pic.twitter.com/YGqoAzGAlS

I always made a point of spending time with as many different work units as possible in the State Library. I wanted to hear new ideas, spot potential innovators, understand both the organisation’s pressure points and also its areas of opportunity. I also put in the hard yards serving others, spending time on the set-up and pack-down for events both on- and off-site, or supporting project officers with some of their routine duties.

I spent one of my first weekends in Brisbane setting up and demounting gazebos for a partnership event involving our Indigenous team kuril dhagun and Brisbane’s rugby league stars, the Broncos. It was invaluable in getting to know the team, seeing exactly what services we offered, and showing that I wasn’t just going to waft around in a cushy role making others do the onerous stuff.

3. Be tenacious
Change is rarely straightforward, and bureaucracies aren’t always comfortable with creative or messy pursuits – yet a degree of messiness is necessary if we’re to avoid merely repeating the outcomes of the past. Institutions often seek out my skills because they have discovered the path to change is rarely smooth. As an outsider, you will face people who say, “But we’ve always done things this way” and “What’s the point of playing about with the status quo?” Their concerns need to be listened to and respected, but you must also be tenacious enough to serve as a role model when the going gets tough and the process of change starts to bite.

Remember, too, that some teams will already regard themselves as innovators or even feel that it is impossible to improve on their existing offer. They may not welcome the attention of a critical friend. Again, patient listening reaps enormous rewards. Common ground almost always exists: don’t give up on the quest to find it. Initiatives like the multi-team task forces established by State Library’s CEO Vicki McDonald in 2017 helped with this, encouraging staff members from across work units to collaborate for a specific strategic goal.

4. Allow yourself to be surprised
Given that your job is to serve the organisation, the best ideas and collaborations could come from anywhere – see point two above. One of the most satisfying parts of this role is the element of surprise.

When I joined the State Library of Queensland, I’d rarely worked with archivists or conservators. I figured they’d be timid souls, fond of procedure and loath to change or respond nimbly to events. Yet when I located the forgotten final interviews of gay Australian celebrity Bernard King, not only did our Queensland Memory team move swiftly  to acquire them from their owner in Sydney, they also agreed to fast-track the process as a gesture of LGBTQ solidarity in the wake of the 2016 Orlando shooting.

Their conservator colleagues, whose job is to look after our physical collections, also proved to be more playful than I had expected: they are scientifically minded problem solvers with a stronger future focus than almost any other division, always mindful of how later generations will encounter the objects in their charge. They were also keen to share their expertise through public engagement events like Fun Palaces. Working with these teams proved to be an unexpected delight during my residency.

5. Tell stories
Stories turn data into something we can relate to. Stories underpin the mission and vision statements which steer an organisation, and they also help individual work units to align with that overarching vision. Stories give human context to managerial edicts and they help management to understand the concerns and experiences of staff, users, and stakeholders. As case studies, stories help others to see what is possible; but better still, when you let people tell their own stories through role-play activities like Library Island, fabulous new ideas are brought to light.

Ultimately, what makes a Creative-in-Residence role different from an Artist-in-Residence or Writer-in-Residence is that your creative work focusses on the empowerment of the institution itself; you achieve this by listening closely to all its parts, and then helping that organisation to re-tell the story of what it does in ways which make a lasting practical impact.

Who can be a Creative-in-Residence?
Creatives in this role can be drawn from the ranks of your own staff, or brought in as outsiders – both options have their benefits and drawbacks. Residencies can be long, like mine – initially twelve months, then extended twice – or they can be short “tours of duty”. I’d love to see people experiment with these short stints as a way of bringing regional and marginal voices into the heart of major institutions.

In this role, you’ll work harder than you ever thought possible, catalysing change with little more than your wits, a phone, a computer, and a desk. But you’ll also be free: free to innovate, experiment, explore, inspire, and genuinely make a difference to the lasting business of change. It’s a lot of fun. You should give it a go.

Jane Cowell of State Library of Queensland has not one, but five answers for you over at Medium.

I just published “5 whys to invest in a Creative-in-Residence” https://t.co/UFQUwRhq6k

Jane hired me back in January 2016 for a residency intended to develop staff, challenge convention, engage the wider community, and showcase the organisation’s creative practice. Now, more than a year later, we’re looking back on a successful stint embracing libraries, communities, and partner organisations across Australia’s Sunshine State.

I’m off to the Australian capital Canberra tomorrow to work with Libraries ACT on their annual training day.

We’ll be looking at creative approaches to community engagement, and sharing some neat little tools from my team, including the WELCOME Toolkit for programme design. END_OF_DOCUMENT_TOKEN_TO_BE_REPLACED

In January 2016, I start my role as Creative in Residence for the State Library of Queensland, Australia.

As part of this new adventure, I’ll be launching a weekly e-mail newsletter called Curious, Mysterious, Marvellous, Electrical. In it, I’ll share some of the things I find on my journey through the past, present, and future of Australia’s Sunshine State.

To join up, visit http://tinyletter.com/marvellouselectrical – the first newsletter will go out on Saturday, 9th January.